It can’t be said too often that too often we know too little about history–and what we do know often is either wrong or incomplete.

Over the years we’ve posted many stories that buttress and support what remains to many, many people an unknown historical truth–the Nazis “refined” their murderous system with their notorious Aktion T-4 euthanasia program.

As Peter Saunders has so eloquently written, “The horrific genocide of six million Jews was in fact only the final chapter in the Nazi holocaust story.”

Beginning in 1939, 300,000 disabled people “were gassed or given a lethal injection and cremated in six killing facilities in Germany and Austria,” writes Michael Cook. “This helped the Nazi regime to refine its system for processing millions, rather than ‘just’ thousands, of victims.”

One of the best articles I ever read appeared in the New York Times under the headline, “The Nazis’ First Victims Were the Disabled,” by Kenny Fries. Fries is himself Jewish and disabled, wrote about the connection between Aktion T4, the Nazi “euthanasia” program, and the extermination of the disabled, explaining

I first discovered that people with disabilities were sterilized and killed by the Nazis when I was a teenager, watching the TV mini-series “Holocaust” in 1978. But it would be years before I understood the connections between the killing of the disabled and the killing of Jews and other “undesirables,” all of whom were, in one way or another, deemed “unfit.”

The [German] neurologist [to whom Fries is explaining his research] does not know much about what I’m telling him. While he does know that approximately 300,000 disabled people were killed in T4 and its aftermath, he doesn’t know about the direct connection between T4 and the Holocaust. He doesn’t know that it was at Brandenburg, the first T4 site, where methods of mass killing were tested, that the first victims of Nazi mass killings were the disabled, and that its personnel went on to establish and run the extermination camps at Treblinka, Belzec and Sobibor.

The detail of how it happened, and particularly the role of doctors in the process, is not at all well known.

What ended in the 1940s in the gas chambers of Auschwitz, Dachau, and Treblinka had much more humble beginnings in the 1930s in nursing homes, geriatric hospitals and psychiatric institutions all over Germany.

When the Nazis arrived, the medical profession was ready and waiting.

Fries cites the hugely influential 1920 book, “Permitting the Destruction of Unworthy Life” by Alfred Hoche, a psychiatrist, and Karl Binding, a distinguished lawyer, “which became the blueprint for the exterminations of the disabled carried out by the Third Reich.” But he quite rightly hears ominous contemporary echoes.

A reading of Hoche and Binding, Fries remarks,

shows the similarity between what they said and what exponents of practical ethics, such as Peter Singer, say about the disabled today. As recently as 2015, Singer, talking with the radio host Aaron Klein on his show, said, “I don’t want my health insurance premiums to be higher so that infants who can experience zero quality of life can have expensive treatments.”

Fries ends with this inquiry with an admonition and warning:

At the root of this fear is misunderstanding, misrepresentation, and a lack of knowledge of disability history and, thus, disabled lives.

Today’s Democrats doesn’t even know they are nazis, but they are. Collectivism, big government, high taxes, censorship, racism, ANTIFA (Brownshirts) are only a few of the signs, here’s another: 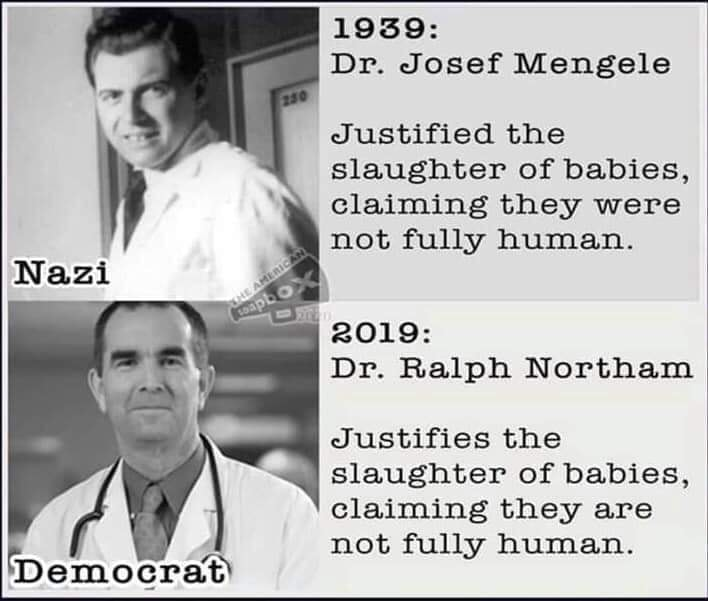