A major earthquake struck Mexico and Guatemala Thursday night, and it could be the biggest in Mexico in more than a century, according to the Associated Press.

The epicenter of the earthquake was off Mexico’s southern coast, but was felt 650 miles north in Mexico City, and as far east as Guatemala and Honduras.

The U.S. Geological Survey said the earthquake measured 8.1 on the Richter scale, but Mexican President Enrique Nieto on Twitter said the latest measures put the earthquake at 8.2, making it the “the strongest in nearly a century.”

The earthquake triggered a small tsunami, with waves of about 2.3 feet. The tsunami is not a big worry, Nieto said.

At least fifteen people have died from the earthquake, Mexican civil defense Minister Luis Felipe Puente said on Televisa network Friday.  Nieto has warned that aftershocks could be as strong as 7.2, and U.S.G.S. has recorded 20 aftershocks higher than 4.0, Reuters reports. 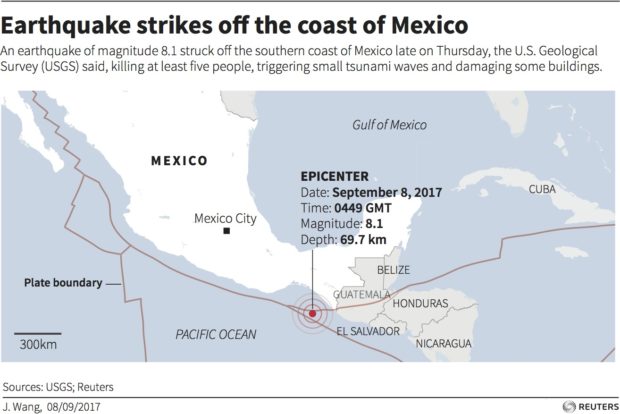 When the earthquake struck at 11:49 p.m. local time, people fled to the streets in their pajamas. Since Mexico City was struck by a devastating earthquake in 1985, the city has imposed building standards and earthquake response systems that sounded moments after the earth began to shake.

“I had never been anywhere where the earth moved so much,” Luis Carlos Briceno, who was visiting Mexico City, told Reuters. “At first I laughed, but when the lights went out I didn’t know what to do. I nearly fell over.”

Three were killed in Chiapas, Mexico’s southernmost and poorest state, according to Puente, and 10 have died in Oaxaca. The governor of neighboring Tabasco state said two children had died, bringing the death toll to fifteen.

“The house moved like chewing gum and the light and internet went out momentarily,” Rodrigo Soberanes, a resident of San Cristobal de las Casas in the Chiapas, told the AP.