In a stunning display of mental illness and a shocking inability to control his emotions, Matt Harrigan the President & CEO at PacketSled, located in San Diego, California, has declared that he will ASSASSINATE President-elect Trump with a sniper rifle.

He even doubled down on his plot and told the Secret Service to “bring it.”

Here is the Linkedin profile for Harrigan’s company.

Below is a series of demented tweets from this vile, violent, and mentally disturbed “businessman.”

Apparently, Mr. Harrigan also has “ties” to the CIA which makes his threat and plot even more sinister. 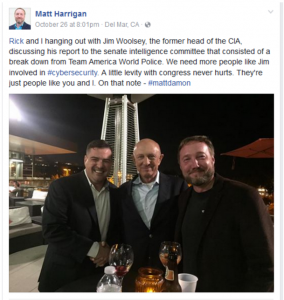 This sicko has been reported directly to the Trump campaign.

In addition, we’re calling on Facebook and Twitter to permanently BAN this man and his business from social media.

Internal Memo Reveals Capitol Police Were Warned BLM from Baltimore Was Bussing in Rioters Disguised as Trump Supporters on Jan. 6 – Everybody knew Democrats was pretending to be Trump supporters, that was for example the point of not having enough security, inviting people in, shooting unarmed people etc. To get things started, it was all planned. A cover up for the election theft.

Mix poison and coffee, – deadly! Mix poison in tea, also deadly … Put poison in food, probably also deadly, right? It’s the same with socialism, no matter how you mix it, it is deadly!!

When low IQ., criminal Democrats are in charge: Several NYC Election Sites Had ‘No Republican Ballots’ During Last Week’s Primary

100 Year-Old Decorated Veteran Breaks Down Crying: “This Is Not The Country We Fought For”

Historian and Author Douglas MacKinnon: Tyranny in America Worse Today than in 1776

Biden administration confirms goal is ‘liberal world order’ – Or, in plain English: Low IQ., corrupt communist (tyrannical) rule, the kind the people need to shed blood to get rid off. The question is, how bad (as in evil, corrupt AND stupid) does it have to get before the people has had enough!?

The Purpose Of Communist Propaganda

The Creed Of Slaves