The candid remarks, made by the likes of UK Foreign Secretary Boris Johnson or outgoing US President Barack Obama, made clear that Trump’s run for presidency, according to them, was an absolutely ludicrous idea.

However, after Trump’s “unexpected” victory which became apparent to the world on Wednesday November 9, several political leaders have been forced to eat their words — they are now extending diplomatic gestures of congratulations.

Boris Johnson Boris Johnson, still serving as London mayor at the time, was not impressed with Trump’s comments about London earlier this year. The Donald, said there were parts of London that were so radicalized that people feared for their lives.

Johnson hit back at Donald Trump, saying: “Crime has been falling steadily in both London and New York — and the only reason I wouldn’t go to some parts of New York is the real risk of meeting Donald Trump.”

No longer the mayor and wearing the Foreign Secretary crown, Johnson has now been forced to perform U-turn and offer a “semi-warm” welcome to the new President-elect on Twitter, extending a hand of solidarity and stating that he was “passionate about the UK-US relationship.”

Social media hit back at Scottish First Minister Nicola Sturgeon, who offered her public endorsement of US presidential hopeful Hillary Clinton on election day, November 8. Sturgeon’s support of Clinton caused a major social media backlash, as she posted the message #ImWithHer on her Facebook page. 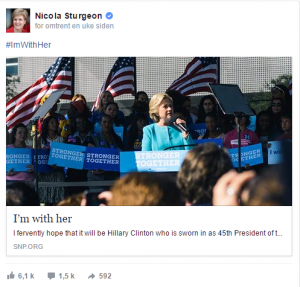 Her followers said that the Scottish First Minister and Scottish National Party (SNP) leader should not be endorsing one single politician, because that her views did not represent those of the Scottish people.

In December 2015, Donald Trump was stripped of his honorary degree by Sturgeon, after he called for a ban on all Muslims entering the US. Trump had been awarded an honorary DBA by Robert Gordon University in Aberdeen.

However, now that Trump is set to occupy the White House, Sturgeon has had to backtrack on her support of Clinton. After presidential election results became clear, she commented that it had not been the outcome she had wanted, but that she respected the decision and that she also valued the relationship between the US and Scotland. “The relationship between Scotland and America is an important one, and I’m not going to, because of my own personal views, risk the interests of Scotland by not engaging with the American government. But the nature of that engagement will depend to some extent on how Donald Trump conducts himself as President,” Sturgeon said.     Theresa May UK Prime Minister Theresa May, who was serving as Home Secretary at the time, was less than impressed by Donald Trump’s comments in connection with Muslims back in 2015. “I think we all agree that the comments Donald Trump made in relation to Muslims were divisive, unhelpful and wrong,” May said in response to his comments about UK Islamic extremism in December, 2015. “I just think it shows he does not understand the UK and what happens in the UK,” she added After US election results were announced however, May, now the UK PM, has changed her tune as she congratulated the businessman and entrepreneur on his victory race to the White House.

In an official statement released by Downing Street, the PM mentioned the “enduring and special relationship based on the values of freedom, democracy and enterprise” which the UK and the US shared.

“I look forward to working with President-elect Donald Trump, building on these ties to ensure the security and prosperity of our nations in the years ahead,” the statement also said. Barack Obama Out-Going US President Barack Obama, was less than impressed with Trumps’ negative rhetoric that often targeted marginalized and minority communities in the US. Obama would often joke about Donald Trump’s run for Presidency and called him “uniquely unqualified” to run the country.

He however, like many others, was forced to congratulate the leader after his presidential win.
On November 9, in front of a crowd of people and acknowledging the differences between himself and Trump, he spoke of working hard to ensure a healthy transition would be achieved. “It is no secret that the President-elect and I have some pretty significant differences,” Obama said with Vice President Joe Biden at his side. We are now all rooting for his success in uniting and leading the country.” Despite protests taking place across America after Trump claimed presidential victory, the next leader of the US will be Donald Trump.

Politicians made a joke of his candidacy, calling him unqualified, racist and sexist. He may have offended people, creating controversy and causing division, but political leaders around the world have little choice and will have to work with Donald J. Trump as the 45th President of the United States of America.