Hillary Clinton’s campaign is spiraling out of control.

She’s losing her woman support, Hispanic support, black support, and now her millennial support is in the toilet. Much of it has to do with her scandal, lies, hacked emails and her failing health. No one with half a brain believes the “pneumonia” story. A recent Quinnipiac poll shows how much support Hillary has lost with millennials in just over a month. 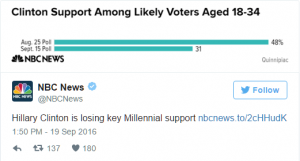