The video of Hillary Clinton’s lifeless body literally being dragged into her van has gone viral – and it’s chilling.

After claiming she suffered from heat exhaustion on a 78-degree morning, Hillary left a 9/11 commemoration ceremony early.

Standing and waiting for the van doors to open, she appeared shaky – out on her feet, really. And when the doors finally open, Clinton totally collapses. Three guards kept her from falling and managed to get her into the van … with her feet dragging behind her.

It took an hour and a half for the Clinton Campaign to even explain what happened. 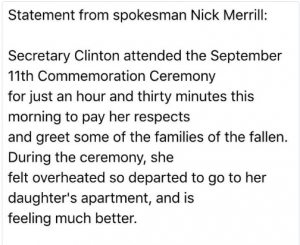 This insident is reported all over now, but this story is picked up from The Federalist Papers.