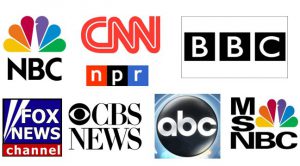 News networks claim they are unbiased and balanced in their reporting. But it’s widely known that there are subtle political differences between the different networks, and they have misreported the facts many times in the past.

Should we be worried that they’re having a bad influence on people and society?

55% of Americans get their news from the TV…

The danger of untrustworthy news is that the public become misinformed and then act on that misinformation accordingly.

On the one hand misinformation might inspire people to foster unhealthy social attitudes based on race , gender or class.

While on the other hand they might use that misinformation to make important decisions such as who to vote for in the elections.

Which in turn affects the future course of the country’s well-being.

This is why political bias in the media is such a hot topic .. ” Read more ..

Support alternative media, including this one, in order for us all to be, and have more voices flagging our views in the open and free marketplace of ideas, views and opinions.

See the power we have, we made CNN (#CHNN) drop it’s rating a few weeks back when the “Black Out” (boycott) campain started on Twitter and other social media. Keep boycotting CNN! Take their power away ..