Why do fascists think they can fool anybody?

Curating, or personalizing news is just other words for censorship. Who doesn’t trust users to be able to sort out what’s important and right and what’s not?

Yes, the nazi-left with their totalitarian, nanny-state mind sets and fascists.

Facebook has tried to filter out what it considers to be “fake news” in many different failed attempts. Now it wants to try again.

In an interview, Facebook CEO Mark Zuckerberg stated that he was interested in building a newsroom for Facebook. The product would be based on a similar model as the Apple Newsroom.

The video, released on Zuckerberg’s Facebook page on April 1, was a conversation surrounding the necessity of curating news, whether a newsroom should be neutral, and whether users should have the ability to choose what they see.

Zuckerberg started off by emphasizing the importance of “high quality and trustworthy information.” The interview was with Mathias Dopfner, CEO of European news aggregate Axel Spinner, who offered suggestions for the product. Dopfner suggested that Facebook pay a licensing fee to news sites and newspapers to use their content, in order to ensure the quality of the news.

Dopfner argued that Facebook, should it start a newsroom, would need to stay “as broad as possible.” He warned Zuckerberg that Facebook shouldn’t curate the news to fit an audience or an ideology. Dopfner said, “You have to keep a degree of neutrality. I would strongly recommend not to curate. Stick to the legal framework. If something is illegal, you take it out.”

Even though Dopfner advocated for neutrality, he still wanted “untrustworthy” news sites to be screened out. The Neiman Lab has criticized Facebook for “not being great” at this.

But Zuckerberg did not seem interested in listening to Dopfner’s warning about curation. He said, “Of course anything that we do is going to be personalized.” He wondered whether or not Facebook should continue to offer the news from pages that users liked to each user, or if the company should build an algorithm that inserted news from other sites that users hadn’t connected to yet. The requirement for an algorithm to insert a piece from a site would be that it would come from a “broadly trusted source.”

Tech news sites are already wondering if that means that Fox News would be shown alongside The New York Times and Washington Post. In the past, when Facebook had a “trending topics” feature, Gizmodo wrote a piece revealing that Facebook employees were blacklisting news trends that were of interest to conservatives.

According to Recode, the product will be launched at the end of this year. 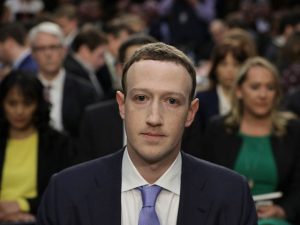 Facebook continues to establish itself as the great referee of the media, picking winners and losers, and propping up discredited establishment media sources that would otherwise naturally fade into obscurity, victims of their own conspiracy-mongering hysteria.

Two stories from the past two weeks highlight this. First, Facebook has stuck to its decision to reverse an earlier promise to include political ads from news publishers in a historical database of political ads, which would allow observers to track the spending and influence of political ads on Facebook over time.

With news publishers exempt, they will be able to push politically biased ads out to audiences on Facebook, controlling for electoral significance, with little opportunity for outside observers to track their activities. Facebook is allowing the media the privilege of being able to influence politics from the shadows.

It’s typical — the corporate media, which harshly criticized Facebook for a lack of transparency in political ads, loves to demand transparency from others, but hates it when any sunlight is directed their way.

Of course, without any clear definition of what “high-quality content” actually is, Zuckerberg would once again be granting his platform more power to pick winners and losers in the media. It’ll be Zuckerberg who gets to decide what a “high-quality” source is, and subsequently push that source to users whether they’ve elected to see it or not.

The influence of user choice, expressed through tools such as the “like” and “follow” buttons, continues to diminish, and the influence of platform CEO choice, expressed through top-down algorithm changes and corporate media partnerships, continues to expand. Breitbart News documented this trend in 2018, when Zuckerberg announced his platform would identify “broadly trusted” news sources to promote.

The decision to announce potential funding for “high-quality news” (by which Facebook obviously means establishment, corporate media) is particularly outrageous given the timing: just a week after Russiagate, a two-year long narrative of the mainstream media, was revealed to be a conspiracy theory.

The public knows what’s up. After the Mueller report exonerated.ed the president, ratings for both CNN and MSNBC took a nosedive. Meanwhile, Fox News, the only establishment TV network that didn’t go full-Russiagate, surged.

Spectacular though the disaster was, trust in the media had reached rock bottom some time before the Russiagate narrative imploded. A recent poll from the Columbia Journalism Review found that Americans now have a lower opinion of the media than of members of Congress, another highly unpopular class. Just over 25 percent of Democrats reported a “great deal of confidence” in the press, around the same number who reported “hardly any confidence at all.” If the mainstream media can’t even convince a majority of Democrats to believe their narrative-spinning, who can they convince?

But this shouldn’t be surprising. Beyond Russiagate, the American public has borne witness to ceaseless media hysteria and conspiracy theorizing over the past two years. This is the same press that pushed baseless smears — now retracted by the Washington Post — against high school kids because they dared to wear MAGA hats while left-wing crazies harassed them.

And that’s just the news stories — flip to the opinions section of any establishment publisher, and you’ll find headlines like “This Is How Racist Your Air Is” (Mother Jones), “Why Are So Many White Men So Angry?” (Washington Post) and “I Broke Up With Her Because She’s White” (New York Times).

Outside the bubble of metropolitan leftism, it’s not hard to see why the establishment media has alienated the public — and you don’t even need Russiagate to tell the story.

The masters of the universe in Silicon Valley are very much a part of that bubble, though. Mark Zuckerberg has bought the argument, pushed by much of the mainstream media, that technology is to blame for the media’s decline (as opposed to the media’s own hysterical, conspiracy-pushing, race-baiting behavior). He’s determined to prop them up, while undermining their non-mainstream competitors with dishonest warning labels, mass-bans, and algorithmic suppression.

If Zuckerberg wants to turn Facebook into a publisher that edits, selects and rejects content for its users, it’s his right to do so, of course. But as Sen. Cruz, Sen. Hawley and other critics of big tech have pointed out, a platform that behaves like a publisher should lose the privileges of being a “neutral platform” — including the all-important legal immunity that protects it from lawsuits over user-generated content and top-down banning.