With stormy weather in the news at the moment, it is worth recalling what HH Lamb had to say about the prevalence of storms in the Little Ice Age. From his book, “Climate, History and the Modern World”:- 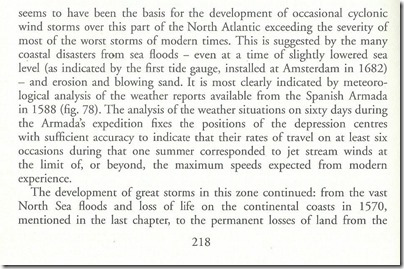 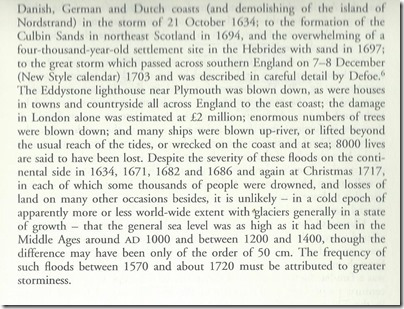 It is a clear reminder that, in this part of the world at least, storms tend to be much worse in a colder world.

The other point of interest, however, is his reference that sea levels may have been 50cm lower than between AD 1000 and 1400. This of course refers to the period around 1700, and we don’t have much idea of how far sea levels rose in the 18thC.

It is generally accepted though that since the late 19thC they have risen by maybe 20 cm. This is strong evidence that current sea level rise is simply part of a much longer term pattern.

It is important to realise that Lamb’s comments on this topic, like much of his work, were not just his personal view, but were based around the work of other scientific experts of his time, such as in this case Sylvia Hallam.