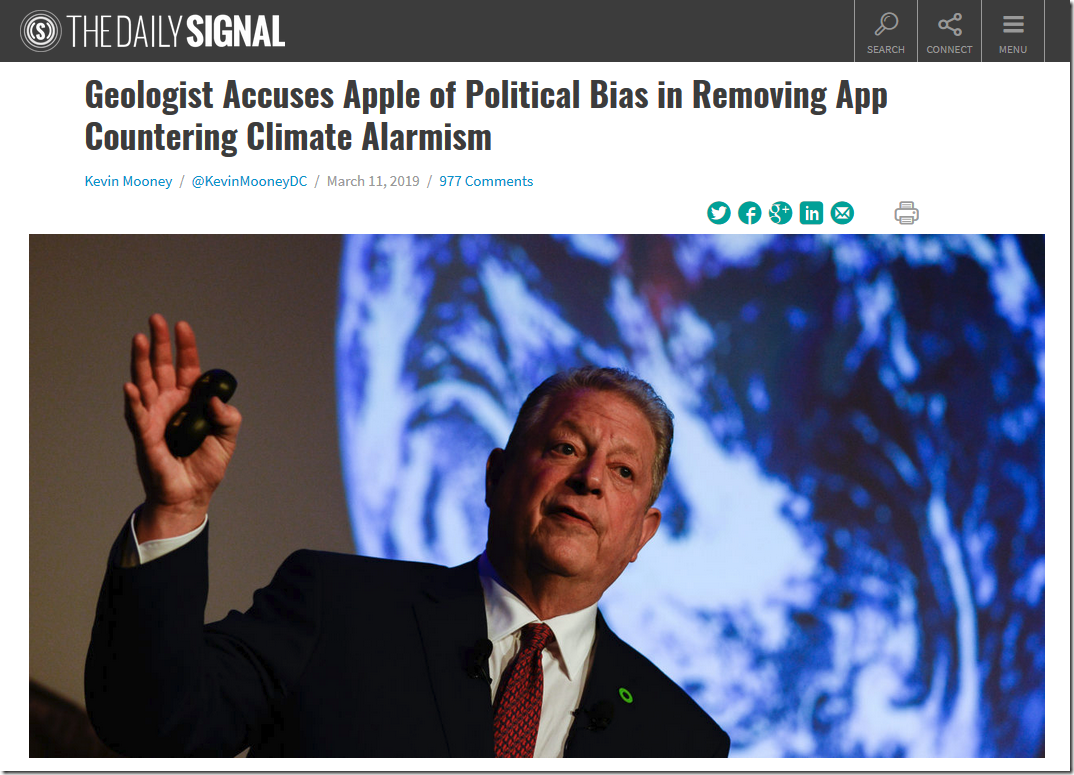 Political figures who support the so-called Green New Deal and other proposals to restrict carbon dioxide emissions are up against some “inconvenient facts” that Americans may access immediately through a smartphone application, a geologist and author says.

But there’s one big problem.

The app, called Inconvenient Facts, is available only to Android users through the Google Play Store. Since March 4, users of Apple’s iPhone no longer can access the app through the tech giant’s App Store.

Gregory Wrightstone, a geologist with more than three decades of experience, told The Daily Signal in an interview that he has his own opinion about what may have transpired inside Apple.

Wrightstone is the author of the book “Inconvenient Facts: The Science That Al Gore Doesn’t Want You to Know,” which served as the basis for the information available from the app.

He notes that former Vice President Al Gore, a leading proponent of the view that mankind’s activities propel dangerous climate change, is a board member of Apple.

“It’s very rare for an app to be approved and then taken down unless there is offensive material or some other extreme issue,” Wrightstone said of Apple’s action in a phone interview with The Daily Signal, adding:

We thought at first it may have been our fault. But I did a search on climate change and global warming in the Apple App Store and pulled up a whole bevy of pro-man-made global warming apps that are really bad. They are not formatted, they have incorrect spellings and no links.

But I suppose they have the political narrative right. Compared to these, our app is the gold standard. I made sure we had charts and links and references to the source for our data. This is all right in the palm of your hand.

A total of 60 facts in Wrightstone’s book are available through the Inconvenient Facts app to Android users. Complete with data, charts, and videos, they challenge the premise of alarmist theories about climate change that link man-made emissions to dangerous levels of global warming.

Gore’s ongoing campaign to convince the public that rising levels of carbon dioxide emissions could trigger catastrophic global warming was the subject of the 2006 documentary “An Inconvenient Truth” and the 2017 follow-up, “An Inconvenient Sequel: Truth to Power.”

Before reversing itself March 4, Apple initially approved the Inconvenient Facts app for sale Feb. 3. Since that time, the app has been downloaded 13,000 times, according to figures Wrightstone provided.

He also points out that the app has earned positive reviews.

“A key takeaway here is that Apple has a monopoly over iPhone apps and the Apple App Store is the only place to get them,” Wrightstone said. “It appears that Apple has chosen to weaponize its control over purchasing apps to stifle science that doesn’t conform to its politically correct notions.”

The Daily Signal sought comment from Apple’s media relations office by phone and email, asking whether the company would address Wrightstone’s allegations of political bias. Apple had not responded by publication time.

The Daily Signal also sent inquiries to Delaware-based Carthage Group LLC, with which Gore is associated, and to the Climate Reality Project, which Gore founded, seeking his comment for this article. Neither organization had responded by publication time.

Users who tap on the Inconvenient Facts app have access to images and data that run counter to much of what was presented in Gore’s documentary films. Some examples:
—Inconvenient Fact No. 53: “There are more polar bears now than we’ve had for 50 years.”

—Inconvenient Fact No. 10 cites a “Recent Inconvenient Pause of 18 years in warming, despite rise in CO2.”

— Inconvenient Fact No. 21: “The current warming trend is neither unusual nor unprecedented.”

The Cornwall Alliance for the Stewardship of Creation, a Christian public policy group that favors free market approaches to environmental policy, published a commentary Friday that is critical of Apple. It concludes that the company’s decision to reject the Inconvenient Facts app “smacks of censorship.”

The study of geology provides important insights into the study of climate change because it considers short-term trends within the larger context of Earth’s history, Wrightstone told The Daily Signal.

“Geologists are probably the most skeptical of all the sciences concerning a man-made link to temperature changes,” the geologist said, adding of carbon dioxide:

Just to be clear, I don’t, and my colleagues don’t, dispute that CO2 is increasing, and I agree that it has to have some slight warming effect on the atmosphere. But I argue that it’s modest and overwhelmed by the same natural forces that have been driving temperatures since the dawn of time. …

Looking out across Earth’s history, CO2 levels are extremely low. I always argue we are actually CO2 impoverished.

Heartland Institute Policy Advisor Gregory Wrightstone was a guest on the Ingraham Angle on Tuesday, March 12 to debunk climate change alarmism — specifically another nutty claim by Bill Nye “The Science Guy.” Laura also noted that Apple deplatformed the new app by the author of “Inconvenient Facts.” Video: The Heartland Institute