From No Trick Zone

By Josef Kowatsch and Dr. Sebastian Lüning
(Translated and edited by P Gosselin)

Temperatures are rising and rising and rising. That’s what we read in any case in the daily newspaper, and that’s what some television professors, activists and climate scientists are telling us. Strangely rarely are temperature curves ever shown. Why is this so? One example is the September mean temperature for Germany, which we use to illustrate this peculiar media documentation gap.

Here we use the official DWD German Weather Service data. When we look at the past 100 years we see a very modest warming of just a few tenths of a degree (Fig. 1). This is no surprise as we find ourselves in the warming phase since the Little Ice Age, the coldest phase of the last 10,000 years. It would have been terrible had the climate stayed at this non-representative low level.

It is easy to see the long cycles in the temperature curve. Above we a cold phase between 1920 and 1930, followed by a warm period during the Nazi time, and then followed by a long-term cold dip.

Beginning in 1985, September began to warm up again before reaching a plateau that took hold just before the year 2000 and at which we currently find ourselves. Based on the past development one could speculate that we are headed towards a slight cooling.

Now let’s look at the period from the end of WWII until today, more than 70 years, the time of the last temperature plateau until today. Immediately we see that we are far from worrisome climate warming (Fig. 2):

Finally we take a look at the past 13 years (Fig. 3), i.e. the development since 2004. Again there has not been any significant warming. In fact there’s been some cooling. Everything other than a climate catastrophe.

Figure 3: Chart of September mean temperatures in Germany over the past 13 years. Data source: DWD.

Getting back to the primary question of why isn’t the German media showing the real German temperature curve, obviously the real facts are just too inconvenient. A pert of the public could even lose its faith in the much-preached climate catastrophe and end up sharply criticizing the harsh sacrifices now being made because of the climate fear that has been instilled by policymakers.

It’s high time for the issue to be made transparent and to push back against the activism. What’s needed is a new environmental protection ethic, one which addresses all the problems.

The excessive focus on the climate question is no longer sustainable and is even counterproductive. Other more important problems that can be solved over the short term require greater attention — clean water, clean air and clean food being evenly distributed — would be a common ethical goal for mankind to strive for. The fear-mongering climate protection issue is a repeat of the earlier business model of sin and the sale of indulgences.

Ahhh, here it is

The HADCRU, GISTEMP, and NOAA surface temperature archives rely on the same underlying input data and therefore are not independent data sets. Limitations of the GHCN affect all data sets. Sampling discontinuities, urbanization and land use changes have decreased the quality of GHCN data over time. Differences in data processing methods between research teams do not compensate for poor underlying data quality inherent in the GHCN data. A similar situation exists with historical Sea Surface Temperature (SST) data sets which are derived primarily from the International Comprehensive Ocean-Atmosphere Data Set (ICODADS).

Computer simulations involve mathematical models implemented on a computer imitating one or more natural processes. Models are based on general theories and fundamental principles, idealizations, approximations, mathematical concepts, metaphors, analogies, facts, and empirical data (Peterson, 2006, Meehl et al., 2012). Judgments and arbitrary choices must be made in model construction to apply fundamental laws to describe turbulent fluid flow. The large size and complexity of the atmosphere prohibit the direct application of general theory.

“The forecasts in the [IPCC] Report were not the outcome of scientific procedures. In effect, they were the opinions of scientists transformed by mathematics and obscured by complex writing. Research on forecasting has shown that experts’ predictions are not useful in situations involving uncertainly and complexity. We have been unable to identify any scientific forecasts of global warming. Claims that the Earth will get warmer have no more credence than saying that it will get colder.”  –  Green and Armstrong, 2007.

“This analysis, set into context of the climate modeling, points out the fact that there exists set of domains where the environmental interface temperature cannot be calculated by the physics of currently designed climate models.” – Mihailović et al., 2014

The global atmospheric system is dynamic and is constantly in a state of change and adjustment. The sun is the primary climate change driving force.

Using a Climate Sensitivity best estimate of 2°C, the increase in [global] temperature resulting from a doubling of atmospheric CO2 is estimated at approximately 0.009°C/yr which is insignificant compared to natural variability.

Estimates of climate sensitivity differ widely suggesting that this characteristic of the climate system is not well-understood (Schwartz et al., 2014).

A simple model predicts that a doubling of the CO2 concentration in the atmosphere would result in a small increase of the Earth’s surface temperature, from approximately 0.[5] to < 0.7°C  (Kissin, 2015).

“[A] doubling the CO2 concentration in the Earth’s atmosphere would lead to an increase of the surface temperature by about +0.5 to 0.7 °C, hardly an effect calling for immediate drastic changes in the planet’s energy policies.” – Kissin, 2015

To date the impact of CO2 is assessed universally within a global reference frame. Although atmospheric CO2 has steadily increased the average satellite global temperatures have flattened since approximately 1995. 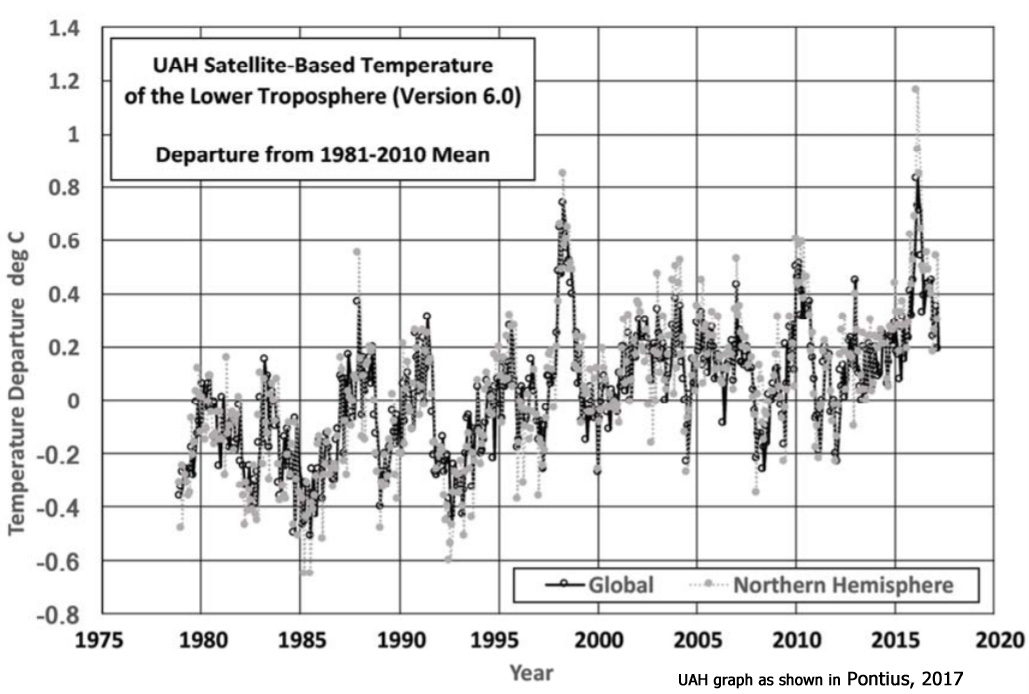 From such trends, it must be inferred that changes in global lower troposphere average temperature correspond to fundamental changes in the climate system beyond internal variability.

The impact of future atmospheric CO2 warming on the Riverside locational reference frame must be estimated.  GCMs [climate models] could be applied to project future global temperatures and those projections could be downscaled to the Riverside area. However, such efforts would be potentially misleading because of the limitations of GCMs discussed previously.  Detailed assessments of the CO2 effect have been performed analyzing the Earth’s energy balance in the total atmosphere column and the reduction of the upward infrared radiation emission at the tropopause. The impact of CO2 on warming of the Earth is expressed in terms of “climate sensitivity,” which is the amount of warming that could be  expected as a result of doubling of the CO2 concentration.

Available temperature data from both the Riverside Fire Station No. 3 and the Riverside Municipal Airport demonstrate horizontal trends within a wide band of  variability. Historical evidence of a significant increase in surface temperatures due to increases in atmospheric CO2 is absent from these data.   [C]limate models are useful but limited in their representation of underlying physical processes.  Uncertainties and other limitations discussed previously render such models unreliable for long-term global temperatures or local climate change prediction.

Climate sensitivity may be applied to estimate the warming effect of CO2 on the locational reference frame.  Factors affecting Climate Sensitivity are not well-understood and estimates differ among researchers. Alternatively, a site-specific model could be developed to estimate the future impact of CO2 warming on a particular location. If atmospheric CO2 continues to increase at its current rate the small annual temperature increase expected at Riverside will likely be insignificant (e.g. < 0.01°C/yr) compared to natural temperature variability.

A slight increase in minimum daily temperature is noticeable at Riverside Fire Station No. 3 after 1998 (Figure 8, lower) with a corresponding slight decrease in the daily temperature range (Figure 9). This trend is most likely due to the urban heat island effect (Tam et al., 2015)resulting from increased development within and around downtown Riverside over this extended period.