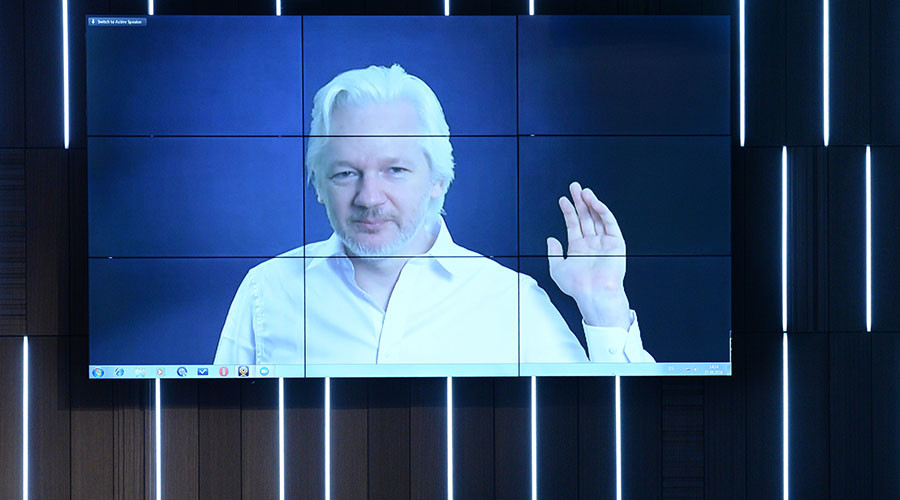 The journalist behind the world’s most well-known whistleblower website appeared via videoconference at a session of ‘End of the Monopoly: The Open Information Age’, part of the ‘New Era of Journalism: Farewell to Mainstream international media’ forum organized at the Rossiya Segodnya International Multimedia Press Center in Moscow.

Assange is far from the only one to notice the link between Google and the Clinton campaign. Behavioral Psychologist Dr. Robert Epstein has pioneered research on how search engines affect elections and much more. He told Lee Camp, host of RT America’s ‘Redacted Tonight’, that “when one candidate is higher in search rankings ‒ that is, looks better than another candidate in search rankings ‒ that shifts a lot of votes to that candidate. And it’s not a tiny number. It’s a very, very big number of votes.”

Humans are trained to believe that the higher ranking links are “better” and “truer,” Epstein explained.

Last year, billionaire Alphabet chairman Eric Schmidt created a little-known start-up company called The Groundwork, “the sole purpose of which is to put Hillary Clinton in office,” he said. “It’s a very secretive organization, super high-tech stuff, and [it’s] very likely they’re using these techniques that we’ve been studying in our research to make sure that votes are shifted to Hillary Clinton in November.”

Assange believes that unlike Donald Trump, Democratic presidential candidate Hillary Clinton is predictable and will constitute a problem for freedom of speech in the US if elected.

“Of course she when she is in power… She is a problem for freedom of speech,” the whistleblower said. “We know what she is going to do. And she made the chart for the destruction of Libya, she was involved in the process of taking the Libyan armory and sending it to Syria.”

“Google is heavily integrated with Washington power, at personal level and at business level… Google, which has increasing control over the distribution channels,… is intensely allying itself with the US exceptionalism,” Assange said, speaking in a video link from the Ecuadorian embassy in London.

“It [Google] shows the will to use that at different levels. It will inevitably influence its audience,” Assange said, recalling the occasion when Google leased its front page to “promote [US State Secretary] John Kerry’s call for bombing on Syria in 2013,” along with conspiring with “Al Jazeera to encourage Syrian defectors.”

Washington and Google likewise feel threatened by China and view the country as a rival, with  Schmidt viewing China as“his enemy,” the WikiLeaks founder said.

“I see a Google exit from China… It seems much more to do with Google’s feeling that it is part of ‘family America’ and that it is opposed to the Chinese,” said Assange.

Another shocking claim from Assange is that 80 percent of the US National Security Agency’s (NSA) budget has been privatized as part of the merger between power and big business.

“There is a merger between the corporate organizations and state… 80 percent of the National Security Agency budget is privatized,” Assange said, stressing that the NSA “is the core of the US deep state… There has been a smoothing out between the government and the corporations,” the whistleblower said.

Assange has been stuck inside the Ecuadorian embassy in London since he took refuge there in June 2012 to avoid extradition to Sweden. In Sweden, the Australian is wanted for questioning by the authorities regarding allegations of sexual assault against two women in 2010. The 44-year-old has denied the accusations; he says that being taken to Sweden would only pave the way for further extradition to the US, where he charges of espionage, conspiracy, theft of government property and computer fraud, which could result in up a minimum of 45 years behind bars for his role in helping the currently-imprisoned Chelsea Manning leak US diplomatic cables in 2010.