“Gatebreaker” is a word I use to describe a special kind of document that until recently has been few and far between. It is a one or two page nontechnical refutation of a specific alarmist argument. It is something a student or citizen can use to confront an alarmist gatekeeper, hence the name gatebreaker. I wrote about the need for gatebreakers several years ago.

The Heartland Institute has just published a whopping 22 gatebreakers, with more promised. This is a true wealth of important skeptical material, unlike anything we have seen before. My dream is coming true.

A gatebreaker is something a skeptical student can send around to the class when the teacher insists on alarmism. Or something short and simple to send to a journalist in response to an alarmist article, or to a politician making alarmist speeches, or the local blowhard alarmist. It’s power lies in its specificity and its simplicity.

The Heartland website is called “Climate at a Glance” (https://climateataglance.com) which makes it sound softer than it really is, sort of like a pink pistol which you can actually buy. These are not glances; they are hard hitting rebuttals.

Heartland calls these short pieces “summaries” because each summarizes a strong response to a common alarmist claim or argument. The summaries are wide ranging because the climate change debate is like that. There is hard science, but also policy, economics and things in between. Extreme weather gets a lot of attention. Here is a partial list to give the flavor of the mix:

Plus a bunch more.

Here is how Heartland explains it. The what: “This website condenses frequently argued climate issues into one- or two-page “at-a-glance” summaries. Bullet-points at the top provide quick, memorable information. Short summaries of a paragraph or two provide additional depth. Many summaries include powerful visual graphs. Embedded links verify the information.”

And the why: “Climate At A Glance puts frequently argued climate issues into short, concise, summaries that provide the most important, accurate, powerful information. The summaries are designed to provide a library of solid yet simple rebuttals so that legislators, teachers, students, and laymen can easily refute the exaggerations of the so-called “climate crisis.””

Taken together these summaries make a nice short course on the climate change debate.

In addition to refuting the primary alarmist arguments, Heartland might consider adding summaries of positive skeptical arguments related to key issues that alarmists ignore. These include issues like the flaws in the climate models, the little ice age, natural variability, scaring children, the impossibility of 100% renewables, and the incredible benefits of fossil fuels.

Then too it would be very useful if some of these skeptical summaries were specifically geared to the new Next Generation Science Standards. These are just coming into force for many of America’s K-12 students. Climate change is taught in both middle and high school, with a definite slant toward alarmism. Students are required to use climate models in middle school. No doubt these are alarmist models.

Also there is a somewhat different approach, which I have experimented. This is to teach just that there is a serious scientific debate on a given issue. The student is not expected to understand the technical scientific debate. Rather it is like going to visit a big laboratory, to see that a lot of work is being done. This approach is useful in settings where digging into the science would be disruptive.

I do this by first briefly explaining both sides of the issue, then show the student a Google Scholar search on that topic in the recent scientific literature. For example, a search on “little ice age” finds over 10,000 articles in the last five years talking about the LIA. Over 250 have it in their article title. Clearly there is still a ton of research going on. My LIA gatebreaker is at http://ccdedu.blogspot.com/2019/05/are-we-coming-out-of-little-ice-age.html.

But possible additions are not a criticism of the present grand package. Heartland’s new collection of gatebreakers is an awesome resource. A clear antidote to climate alarmism at the street level. Spread the word. Climate at a Glance is a game changer.

The Heartland Institute has also launched another webpage worth bookmark and visit: http://climaterealism.com/

Facebook had “independent” activists “fact check” this picture’s information (below). According to them, windmills are produced, transported and installed by fairy dust .. Leftists are so fucking stupid!  ??? 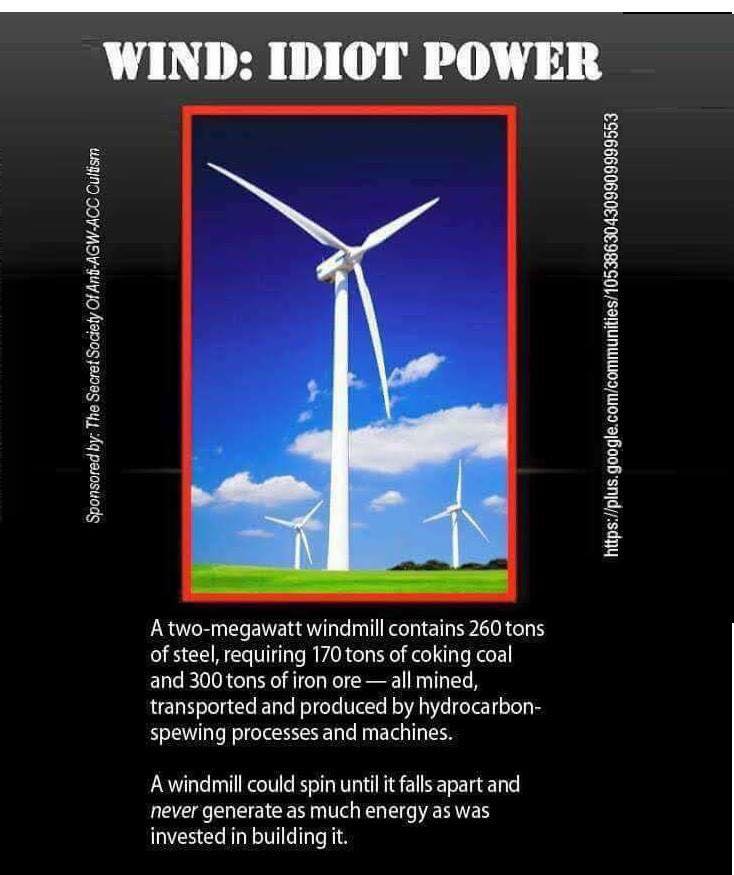