President Trump made a promise when he was on the campaign trail. He vowed to cut waste and save the hard-working American taxpayer money. And that’s exactly what he’s doing.

In another bold move, President Trump is cutting MORE aid to anti-American Palestine.

U.S. President Donald Trump has ordered that $25 million earmarked for the care of Palestinians in East Jerusalem hospitals be directed elsewhere as part of a review of aid, a State Department official said on Saturday.

Trump called for a review of U.S. assistance to the Palestinians earlier this year to ensure that the funds were being spent in accordance with national interests and were providing value to taxpayers.

“As a result of that review, at the direction of the President, we will be redirecting approximately $25 million originally planned for the East Jerusalem Hospital Network,” the State Department official said. “Those funds will go to high-priority projects elsewhere.”

The aid cut is the latest in a number of actions by the Trump administration that have alienated the Palestinians, including the recognition of Jerusalem as Israel’s capital and moving the U.S. embassy to Jerusalem from Tel Aviv.

Last month, the Trump administration said it would redirect $200 million in Palestinian economic support funds for programs in the West Bank and Gaza.

And at the end of August, the Trump administration halted all funding to the United Nations Relief and Works Agency for Palestine Refugees (UNRWA), a decision that further heightened tensions with the Palestinian leadership.

Palestinian refugees have reacted with dismay to the funding cuts, warning they would lead to more poverty, anger and instability in the Middle East.

“This dangerous and unjustified American escalation has crossed all red lines and is considered a direct aggression against the Palestinian people,” it said.

At the gates of two of the East Jerusalem hospitals affected, medical staff were aware of the decision but refused to comment.

One of the centers, Al Makassed Islamic Charitable Society Hospital, said in statement the U.S. aid cuts come as the “hospital is going through a suffocating crisis as a result of the lack of flow of financial aid, and the piling up of debts and funds held back by the Palestinian government”.

It said it had received 45 million shekels ($12.5 million) of the U.S. money to treat patients from the West Bank, Gaza and East Jerusalem. In the statement hospital CEO Dr. Bassam Abu Libdeh “questioned the justification behind mixing political issues with medical and humanitarian issues.”

The last round of U.S.-brokered Palestinian-Israeli peace talks collapsed in 2014. 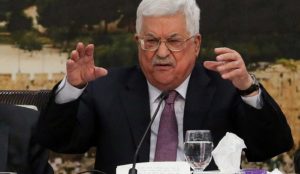 Refugee status is not some heirloom passed from generation to generation. My latest in PJ Media:

CNN reports that “the United States is ending all funding to the United Nations agency tasked with supporting Palestinian refugees, the U.S. State Department said Friday, describing the body as ‘irredeemably flawed.’”

Indeed it is, and this Trump administration move is courageous and welcome.

Palestinian “refugee” status is as trumped-up as the “Palestinian” nationality itself, and there is no reason why U.S. taxpayer dollars should continue to prop up this jihadist fiction.

The Trump administration’s decision to cut off U.S. funding to the UN Relief and Works Agency (UNRWA) is a significant blow to this corrupt and dishonest organization. as the United States has been its largest donor. U.S. taxpayers doled out $350 million to UNRWA in 2017 alone.

All that money went towards perpetuating fictions which aided the Islamic jihad against Israel. World Israel News noted recently that when UNRWA was established, it offered aid only to “the original refugees who had lost their ‘home and means of livelihood’ as a result of the Arab-Israeli War of Independence in 1948.” However, “it was only several years later that the eligibility requirements changed to include the refugees’ descendants, which meant that instead of the numbers steadily dropping as the years pass, they have jumped exponentially.”

This has never happened before in the history of the world. Refugee status has never before been passed on to one’s children, grandchildren and great-grandchildren.

In 1948, when the State of Israel was established, millions of people were refugees, having been displaced from their homes in Europe by World War II, or in Asia by the partition of India and Pakistan. Almost all of Europe’s surviving Jews had lost their homes, and nearly a million Jews were exiled from Muslim countries when Israel was founded.

Czechoslovakia expelled the Sudeten Germans; Germans were likewise expelled from East Prussia and other Eastern territories that it lost as a result of the war. Millions of Poles and other Europeans were also refugees.

Yet today we never hear about Hindu or Muslim refugees from the time of the Partition, or Jewish refugees from Muslim countries, or Germans or Poles or other refugees in Europe. Why not? Because those people for the most part moved elsewhere and got on with their lives.

Most of them would have been appalled at the idea that they should pass on their refugee status to their children or grandchildren. The fact that they were refugees at all was not to them a badge of honor, but a time of difficulty in their lives that they were glad to have survived and put behind them.

Not so the Palestinians. After the Muslim countries surrounding Israel failed to destroy the Jewish State in 1948, all of them except Jordan refused to grant the displaced Palestinians citizenship. This was not due, at least overtly, to hostility to their cause, but it was due to an indifference to their plight, and a determination to use them as political pawns. The fact that there are any Palestinian refugees at all today is due solely to the fact that Muslim countries have wanted to keep the “refugee crisis” alive as a stick they could use to beat Israel.

Refugee status has been passed on from generation to generation like a family heirloom in order to milk the United States and other Western countries for support for these spurious refugees, and to serve as a constant reminder to the world that Israel exists on “stolen land.”

Even that isn’t true. Most of the actual refugees — that is, the people who actually left Israeli territory in 1948 — were not displaced by the Israelis. They were told to leave by Muslim leaders. Those leaders told them to get out of the line of fire, and assured them that once the Jewish state was destroyed, they would be able to return to their homes. It didn’t work out that way. The 1948 jihad against Israel was defeated, and the everlasting Palestinian refugee was born.

President Trump is right to put a long-overdue end to the American underwriting of this charade.

Will this get the lavish international establishment media coverage that the Marches themselves received? No? Now, why is that?

Gaza’s Hamas leader Yahya Sinwar openly admitted on Tuesday that the weekly “March of Return” protests staged on the Gaza border in recent months were intended to avert an internal crisis and divert pressure onto the Israelis.

“After the reconciliation efforts (between Hamas and Fatah) reached an impasse, a number of factions planned to cause an internal explosion in the Gaza Strip, but the Marches of Return thwarted the plan,” Sinwar said during a Hamas conference in the coastal enclave.

“Palestinian officials collaborated with Israeli intelligence in order to sabotage the reconciliation efforts,” he claimed.

Sinwar also said that no arrangement has been reached with Israel to put an end to daily hostilities, despite the quiet that has prevailed on the volatile border in recent days….