She lies about everything, this is just more of the same dishonesty from a deeply corrupt and dishonest criminal.

Crooked Hillary Clinton will do anything to win this election. She will buy off anyone she can to make it appear as though she is doing well. Now, Hillary hacks are saying polls show her pulling away from Donald Trump in 5 key battleground states, but there is one huge problem with what they are saying, and you’ll be shocked at how dirty Hillary is getting.

A new poll is making headlines, like this one on the Daily Mail saying, “Clinton is beating Trump in five battleground states following debate ‘victory’ as she pulls ahead in the polls.” Is this true? Did Hillary get a huge bounce after that rigged debate?

The article goes on to cite a very extensive poll done by an organization called “Public Policy Polling,” saying:

With only five weeks to go until the election Hillary Clinton is ahead in five key ‘battleground’ states – Florida, Colorado, North Carolina, Pennsylvania and Virginia – which a presidential candidate needs to win to make it to the White House.

The Democratic nominee has bounced back from her mild bout of pneumonia and performed strongly in the poll, by Public Policy Polling, which was carried out after Monday’s first presidential debate.

Wow, reading that it sure seems like crooked Hillary is on fire, just blazing a trail to the White House, full steam ahead. There’s just one problem. If you look at the poll, you read in fine print that it was paid for by Votevets.org, which is a Hillary SuperPac.

Votevets.org’s Facebook page is full of anti-Trump nonsense, like this one post from today that said, “At an Iowa rally, Donald J. Trump asked non-Christians to identify themselves – and then asked his supporters if they should be allowed to stay.” 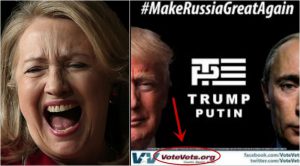 The Montana Watchdog called Votevets.org “a phony Veterans group,” saying its sole purpose is to back all liberal candidates.

This poll was funded straight from Hillary’s corrupt groupies, who are now in panic mode as she is doing poorly in all battleground states. As a Democrat, she should be winning Colorado and Iowa, but it’s a virtual tie in those states and a few legitimate polls have Trump up 3 to 5 points.

Hillary is pulling out all the stops to get under the skin of voters, trying to make it seem as if she is doing really well and pulling ahead of Trump. The fact is, she is not pulling ahead. Trump is surging so she is paying for bogus poll results, and that really stinks of high desperation on her part.