Could she be more condescending? Name Calling is not an argument!

During a fundraiser in New York City Friday evening, Democratic presidential nominee Hillary Clinton described half of the Americans supporting Donald Trump as a “basket of deplorables” made up of “racist, sexist, homophobic, xenophobic, Islamophobic” people.

“You know to just be grossly generalistic, you could put half of Trump’s supporters into what I call the basket of deplorables,” she said as the crowd laughed and applauded. “…the racist, sexist, homophobic, xenophobic, Islamophobic, you name it.” Clinton said that it was unfortunate that Trump had given them a voice, citing “offensive mean-spirited rhetoric” on websites and Twitter. “Some of those folks — they are irredeemable, but thankfully they are not America,” she said. She praised the supporters attending her fundraiser as “friends” who were in the “other basket.” Clinton tried to signal empathy for those were “desperate for a change” pointing out that they felt that “the government has let them down, nobody cares about them, nobody worries about what happens to their lives and their futures.”

“They don’t buy everything he says, but he seems to hold out some hope that their lives will be different,” she said, calling for her supporters to “understand and empathize with as well.” Clinton’s remarks drew comparisons to rhetoric from former failed Republican presidential nominee Mitt Romney, who pointed to the 47 percent of America that were just looking for a handout from the government. Romney’s remarks, made in private, were secretly recorded and made public, dooming his presidential campaign against President Barack Obama. But the former first lady made her remarks in front of reporters, as she allowed her campaign press pool access to the event. 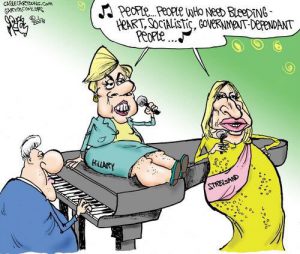 Clinton’s event was in New York City with Barbara Streisand, who performed a parody of the song “Send In The Clowns” which mocked Trump.

Is he that rich?
Maybe He’s poor
‘Till he reveals his returns
Who can be sure?
Who needs this clown?

Something’s amiss
I don’t approve
If he were running the free world
Where would we move?
Name me a town
Just who is this clown?

And if by chance
He gets to heaven
Even up there he’ll declare
Chapter eleven
Who’d hire this clown?
This sad vulgar Clown
“You’re fired” you clown.

Hillary’s kind
Smart that is clear
While she is giving us hope, Trump is selling us fear
Look how he changes his views every time that he speaks
It’s lie after lie
Can’t take eight more weeks

This is no farce
Maybe he’s broke
Is this the art of his deal
or some awful joke?
You’ve got to admit
This silly half wit
is so full of ___!

What i found most refreshing is her plan for the economy, her plan to produce more jobs, her plan to secure the borders .. Just kidding, she has no plans for anything except enriching herself, her family and her friends through more of the same “Pay to Play” schemes.