Behind the mass protests, choreographed chants and acts of violence, leaders of anti-Trump “resistance” efforts are communicating the same simple but dark message: they want to make America “ungovernable” for the president of the United States.

These protesters say they will do whatever it takes to keep Trump from enacting his agenda, and many of them have shown a willingness to destroy public property, assault law enforcement officers and inflict violence upon their fellow citizens. 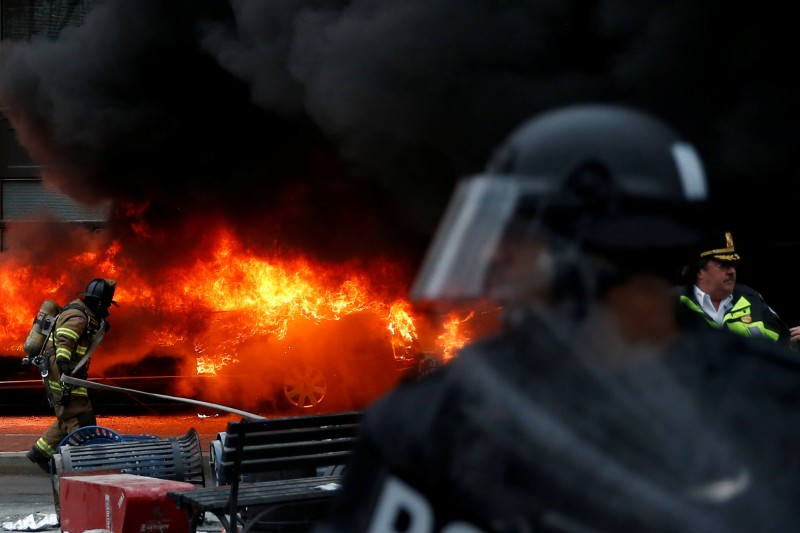 Police and firefighters stand near a limousine which was set ablaze during a protest against U.S. President Donald Trump on the sidelines of the inauguration in Washington, D.C., U.S., on January 20, 2017. REUTERS/Adrees Latif

Inauguration Day provided a hint of what to expect from the far left during Trump’s presidency: well-organized protests that feature alarmist rhetoric and have a proclivity to devolve into anarchic violence. Rioters smashed storefront windows, assaulted innocent bystanders and torched a limo all in the name of opposing Trump.

D.C.’s inauguration weekend violence was believed to be mostly the work of a group calling themselves DisruptJ20, which began planning to disrupt the inauguration and destroy property weeks in advance.

In the days and weeks leading up to the inauguration, DisruptJ20 publicly advertised an invitation to “Join us in refusing to normalize Trump’s presidency, smashing his facade of legitimacy.”

Protestors throw rocks at police during a protest near the inauguration of President Donald Trump in Washington, DC, U.S., January 20, 2017. REUTERS/Bryan Woolston

DisruptJ20 advocates using “direct action” tactics, which the group describes as taking “collective action to make social change without giving power over to an authority or middle person.”

“We don’t ask permission or put our faith in electoral politics, instead, we use our bodies to stop the smooth operation of the system we oppose,” the group’s website states, citing Black Lives Matter’s efforts to shut down highways as an example of the kind of disruption they have in mind. The group is open about its aim to become “an ungovernable force this winter.”

A website called Ungovernable 2017 helped coordinate DisruptJ20’s DC efforts with anti-Trump protests around the country. Some groups endorsed a pledge to never give Trump the “chance to govern.”

“As we resist, we will create new governing institutions, new economic relationships, and new ways of being human,” the pledge reads.

The pledge was endorsed by a number of left-wing figures including: the Malcolm X Grassroots Movement, a black nationalist organization with chapters in eight cities across the country; activist and 2008 Green Party vice presidential nominee Rosa Clemente; and Lamis Deek, lawyer and a New York board member for the Council on American Islamic Relations (CAIR).

Mass demonstrations against Trump have continued around the country in the weeks since his inauguration.

An anti-Trump protest in Seattle a little over a week ago featured an activist calling for murder over a megaphone. The activist, reportedly associated with the Black Lives Matter movement, said that protesters “need to start killing people” and “start killing the White House.”

Milo Yiannopoulos, an editor at pro-Trump website Breitbart, was forced to cancel a speech at UC Berkeley last week after mobs of protesters started fires, assaulted bystanders and pepper sprayed suspected Trump supporters as part of an organized effort to shut down the speech.

Protests against Milo at UC Berkeley. Protesters chanting "This is what community looks like." pic.twitter.com/a0YIZ3epIc

Those protests were spear-headed by a national group calling themselves Refuse Fascism. The group is open about its apparent alliance with Princeton professor and DNC platform committee member Cornel West, who is listed as one of Refuse Fascism’s “initiators.” A spokesperson for West did not return a request for comment.

Video posted to Refuse Fascism’s Facebook page last week features one of the group’s leaders whipping a throng of protesters into a frenzy with calls of revolution. “We need to make this country ungovernable,” she declares. “We need to do what the German people should have done when Hitler was elected.”

Far-left activist group Occupy Oakland also took part in last week’s Berkeley riots. The group, a local spinoff from the 2011 Occupy Wall Street protests, declared victory after Milo’s speech was cancelled due to their mob-like tactics. The group circulated a picture on Twitter of two of its banners from the protest reading, “Become ungovernable” and “This is war.”

We won this night. We will control the streets. We will liberate the land. We will fight fascists. We will dismantle the state. This is war. pic.twitter.com/JnlJMUtgCj

“We won this night. We will control the streets. We will liberate the land. We will fight fascists. We will dismantle the state,” Occupy Oakland captioned the photo. “This is war.”