The White House released a list Monday night of the terror attacks it believes were underreported by the media.

CNN’s Jim Acosta said his producer was given the list of the 78 attacks outside of the White House. Though he did not read the list in full on air, Acosta said it included attacks like Paris, Brussels, Nice, Istanbul and San Bernardino.

Dan Merica said a White House official told him that “most of these attacks did not receive adequate attention from Western media sources.”

A White House official says "most" of these 78 attacks since 2014 have not received enough attention from media. pic.twitter.com/v66rcHxAFI

Here's the list the White House sent of attacks they feel "did not receive adequate attention from Western media sources." pic.twitter.com/lj8eOZQfnY

While speaking at the MacDill Air Force Base Monday — the headquarters of the U.S. Central Command — President Trump accused the “dishonest press” of failing to comprehensively cover terror attacks.

“It’s gotten to a point where it’s not even reported, and in many cases the very, very dishonest press doesn’t even want to report it,” Trump said. 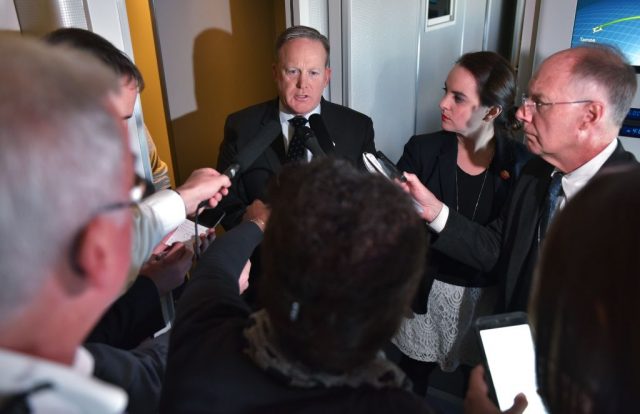 Later, on board Air Force One, White House press secretary Sean Spicer defended the president’s statement, saying that terrorist attacks “aren’t exactly covered to a degree on which they should be.”

“[The president] felt members of the media don’t always cover some of those events to the extent that other events might get covered,” Spicer said.

“Protests will get blown out of the water, and yet an attack or a foiled attack doesn’t necessarily get the same coverage.”

Below is the unedited list of the attacks the White House released Monday.

TRIPOLI, LIBYA
January, 2015
TARGET: Ten killed, including one US citizen, and five wounded in bombing and shooting at a hotel frequented by westerners
ATTACKERS: As many as five ISIL-Libya members

SOUSSE, TUNISIA
June, 2015
TARGET: 38 killed and 39 wounded in shooting at a beach frequented by westerners
ATTACKERS: Seifeddine Rezgui and another unidentified attacker

PARIS, FRANCE
August, 2015
TARGET: Two civilians and one US soldier wounded with firearms and knife on a passenger train
ATTACKER: Ayoub el-Khazzani

HURGHADA, EGYPT
January, 2016
TARGET: One German and one Danish national wounded in knife attack at a tourist resort
ATTAKER: Unidentified

ORLANDO, FL, US
June, 2016
TARGET: 49 killed and 53 wounded in shooting at a nightclub
ATTAKER: US person

NICE, FRANCE
July, 2016
TARGET: 84 civilians killed and 308 wounded by an individual who drove a truck into a crowd
ATTACKER: Mohamed Bouhlel

COLUMBUS, OH, US
November, 2016
TARGET: 14 wounded by individuals who drove a vehicle into a group of pedestrians and attacked them with a knife
ATTACKER: US person