.. as he prepared to carry out an attack in Iraq’
– The terrorists were giving their comrade a send-off to martyrdom in Diyala, Iraq
– As they said their goodbyes at the ISIS ‘blood party’, the deadly bomb detonated
– Comes as Islamic State (ISIS) lost more ground in its last major stronghold in Iraq
– Thought to be just hundreds of ISIS fighters left in Mosul confined to 1km square

An ISIS suicide bomber accidentally killed 12 comrades when his belt exploded while they wished him good luck ahead of a planned attack in Iraq, is has been reported.
The terrorists were giving their comrade a send-off in Diyala when his explosives detonated prematurely, according to a top police official.
It happened at what ISIS call a blood party, where suicide bombers are given a final farewell before martyrdom. 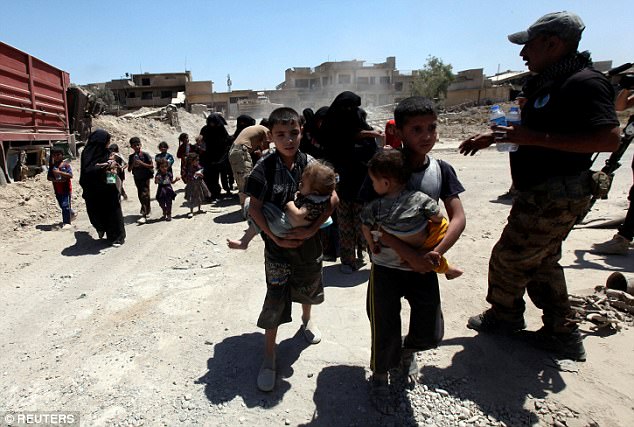 Displaced children fleeing from deadly clashes as Iraqi Counter Terrorism Services (CTS) guide them to safety in the old city of Mosul, Iraq

Dyliala police chief Jassem al-Saadi told Iraqi News in a statement the 12 militants had been killed in the Mekheisa region, northeast of Baqubah near Baghdad.
Just yesterday, ISIS commanders were killed after one of the group’s suicide bombers blew himself up at a meeting following the terrorists’ collapse in Mosul.
The jihadi detonated explosives during a meeting in Qaim District in the west of the Anbar Province and the blast killed a number of leaders as well as himself.
The double botched bombings came as Islamic State lost more ground in their last major stronghold in Iraq with the terror group’s numbers depleted and confined to an area of about a square kilometre in the Old City. 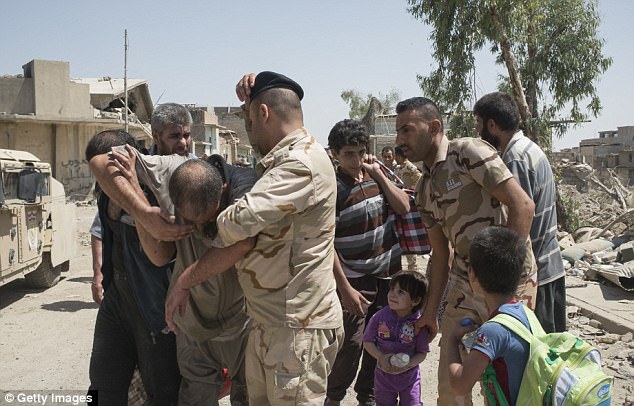 Two Cubs of the Caliphate shoot dead two prisoners. The branch was set up to recruit children to act as suicide bombers for ISIS

Lieutenant Colonel Salam al-Obeidi said that he believes only ‘a few hundred Daesh fighters’, an Arabic acronym for Islamic State group jihadists, are left in the Old City.
Three years after overrunning Mosul and making it the de facto Iraqi capital of the ‘caliphate’ they proclaimed, the jihadists now only control about a square kilometre in the city, commanders said.
There have been 80 suicide bombings by ISIS in the past four days, according to the BBC, and with the terror group facing extinction in Mosul, it appears their motive has now turned to taking as many casualties as they can with them.
Lieutenant Colonel Mohammed al-Tamim said: ‘Daesh members don’t turn themselves in.

‘And if they don’t get killed, their last option is to blow themselves up and commit suicide.’
The most recent attack, which targeted the terror group’s own hierarchy, happened near the Iraqi-Syrian border, according to Iraqi News.
Anbar Province, where the jihadi blew himself up, is still under ISIS control, but a huge offensive is underway to liberate the area.
ISIS fighters have tried repeatedly to slow down the advance of Iraqi forces with suicide attacks.
Rubble from what used to be roofs or facades damaged in the fierce fighting litters the narrow streets, sometimes piled several metres (feet) high.
A soldier who took part in the battle to retake Faruq says air strikes were an important factor because armoured vehicles were unable to be squeezed into the alleyways.
‘We advance and determine where enemies are, then we call for air strikes to eliminate them, (and) then we advance, cautiously,’ said a soldier who did not wish to be identified.
‘We see lots of dead bodies. We’re searching for the others’ who are still alive, he said of the ISIS fighters.’

Inbreading leads to STUPID FUCKS!! (As seen above)