Would anyone in any government appeal to anybody for help, or prayers if they had the science firmly behind them, that their climate assertions was founded on solid ground?

And, why would anybody be praying anyway? Science is based on facts on the ground, measurements and data (No NASA., not counterfeit and illegally adjusted data!).

Who would systematically be suppressing important and provable facts if the real world measurements, data and facts really did show a problem?

And if there really was a problem humans actually could do something about, who in their right mind would put criminal, corrupt Democrats (leftists) in charge of solving the problem?

One example, just one ..

The social media giant is systematically suppressing important and provable facts that put the lie to the climate change narrative.

TV journalist John Stossel sued Facebook over its generic ‘fact checks’ about ‘climate change,’ saying that because they falsely implied he was in error, Facebook had defamed him.

Most people, therefore, have no idea what the climate is really doing, and even fewer know that:

The number of strong tornadoes in the US has been decreasing for 65 years (graph created using this NOAA data): 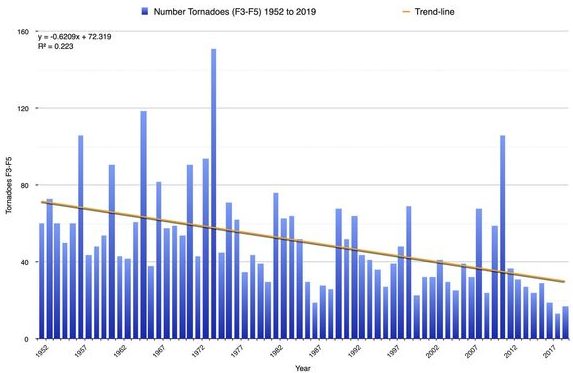 Northern hemisphere autumn and winter snow extents have been increasing for 50 years. 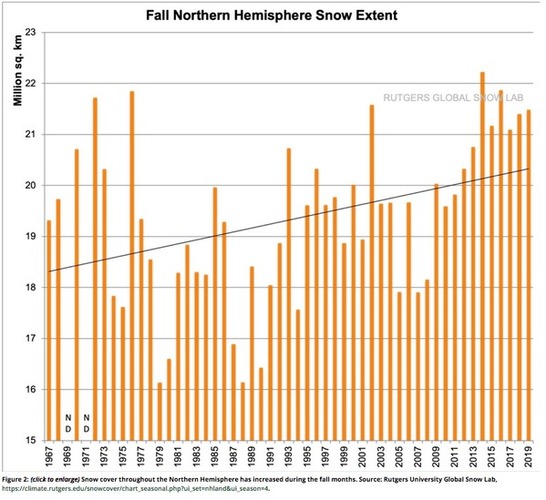 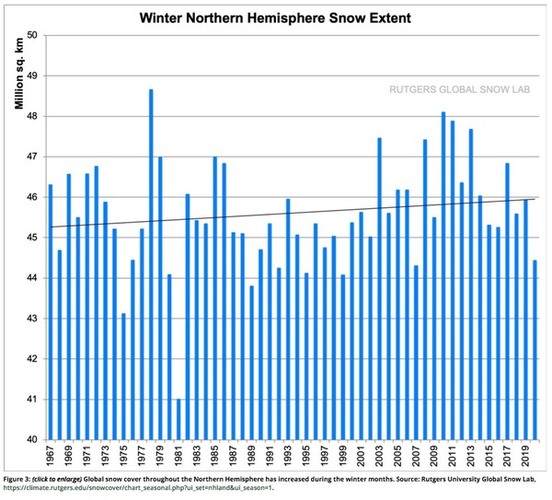 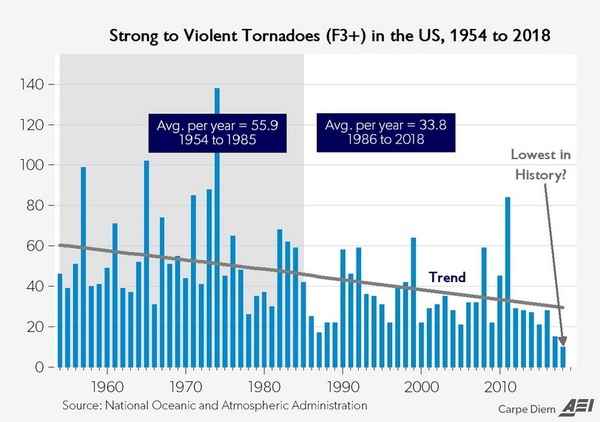 Polar bear numbers have been increasing since the 1960s.

The number of US forest fires has decreased significantly. (Many fires in the 1920s and ’30s were controlled burns, preventing the huge fires that now plague the US. A major factor in recent uncontrolled fires is poor forest husbandry.)

While the above specifics may surprise many, it’s more significant how climate ‘scientists’ completely fail to take any other climate feedback agent into account. They point to warming and blame CO2 but, of course, correlation does not automatically imply causation.

Where is the proof of causation? In truth, it’s highly uncertain how much increased CO2 is influencing surface warming, and how much may be due to other feedback factors.

Here’s some ‘greenhouse’ science for you:

Increasing TTTs result from H2O, CO2, and CH4 (methane) molecules absorbing and re-radiating longwave radiation, resulting in increasing Downwelling Longwave Radiation (DLR) from the tropical troposphere to the ground. (Here, ‘longwave’ refers to the infrared spectrum.) The increased TTTs and DLRs cause the increased surface warming.

However, these TTTs and DLRs are not increasing at the rate IPCC models predict. The 2015 IPCC AR5 Report says of TTT:

Trends in the tropics were more uncertain than global trends although even this region was concluded to be warming.

In summary…it is virtually certain that globally the troposphere has warmed…since the mid-20th century. …. (But) there is only medium confidence in the rate of change and vertical structure in the NH extratropical troposphere, and low confidenceelsewhere. (pp. 194-201.)

In other words, the IPCC AR5 report suggests that there has been some increase in TTT and, therefore, some increasing DLR, but no one knows how much. Nor does the IPCC calculate if this TTT increase is sufficient to have caused the observed surface warming.

It’s unsatisfactory for governments and corporations to bet 40 trillion dollars on ‘virtually certain’ and ‘low confidence’ data and projections.

In great contrast to IPCC lethargy, the eminent Dr. John Christy has performed these calculations and, in his easy-to-read paper, has concluded from the data available that global temperatures will only rise 1.1ºc for a doubling of CO2.

That is a 1.1ºc increase over preindustrial temperatures by the time the atmosphere reaches 560 ppm CO2—which is, “not a very alarming number.”

The graph below shows observed TTT warming per decade, versus climate model estimates, from 1979 to 2014.