Related: FROM Terrorism to Climatism to Pandemism

Thankfully, due to the COVID-19 scamdemic, ordinary citizens are becoming more skeptical over claims made by government science ‘experts.’

It is dawning on us all that for decades, shill third-rate academics have been churning out junk studies in the service of their paymasters in government. Below is a sample of the latest nonsense to scare us about how ‘dangerous’ rises in carbon dioxide (CO2) levels will impede our brain functions.

‘Experts’ from the University of Boulder, Colorado have published a new paper, ‘Continued CO2 emissions will impair cognition’ in Neuroscience News.  See if you can spot their tenuous ‘cause and effect‘ link.

The authors then make it sound, you know, more ‘sciency’:

“In fact, at 1400 ppm, CO2 concentrations may cut our basic decision-making ability by 25 percent, and complex strategic thinking by around 50 percent, the authors found.”

“We conclude that indoor CO2 levels may indeed reach levels harmful to cognition by the end of this century, and the best way to prevent this hidden consequence of climate change is to reduce fossil fuel emissions.”

Tell that guff to the astronauts at NASA and on the International Space Station who know better.

And what about naval submariners who work and live for many weeks, if not months, in confined conditions with very high concentration levels of CO2 where they must perform critical, life-impacting cognitive functions. Yet every safety test known to NASA and the military performed using real APPLIED SCIENCE shows that no such danger to life or cognitive performance occurs.

“No Statistically Significant Effects On Acute Health Symptoms Or Cognitive Performance Were Seen During Exposures Of College Students For 4.25 H To Pure CO2 At 1000, 3000, Or 5000 Ppm.” [2]

So, there you have it – and what gave away the inherent bias of the authors of the Boulder, Colorado faux study?

“the best way to prevent this hidden consequence of climate change is to reduce fossil fuel emissions.”

Do you see what they did there? It’s like, ‘Hey, teacher, forget about switching on the fan or aircon, or simply opening that window!’

Did you also note how neurosciencenews.com embellished this fake narrative by depicting a traffic jam and white smoke? (carbon dioxide is colorless and odorless). 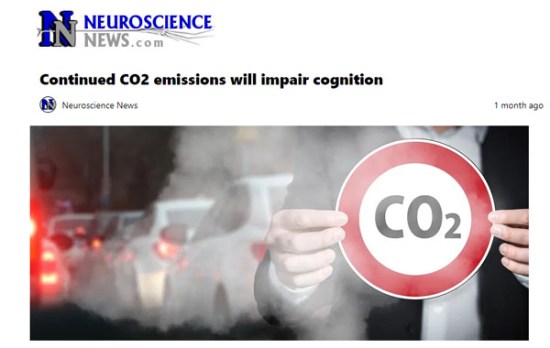 But the study never tested (nor was about) car exhaust fumes or climate change – it is sleight of hand because it refers to children “packed into classrooms” – it only concerns exhaled carbon dioxide from breathing!

Without one shred of evidence – and  usurping well-established empirical science from other fields of research – these ‘experts’ determine the non-problem of CO2 brain fog is solved by cutting out all those ‘deadly’ industrial emissions.

However, humans and other animals breathe out waste CO2 as a natural function. When we gather in confined spaces the CO2 will rise without adequate ventilation (see: Human CO2 Exhalation A Whopping 40,000 Parts Per Million!) You can ban all the cars in the world you like, but if you put a flock of tree-huggers in any poorly-ventilated room they soon fill it with carbon dioxide.

Thus, the climate connection made by Kris Karnauskas is arbitrary and capricious anti-science (mere groupthink sentiments expressed without any empirical substantiation).

These extremist loons aren’t interested in simple remedies for mitigation. They want a sledgehammer to crack a nut. They want nothing less than wholesale global de-industrialization; a return to feudalism for the masses while their elite globalist paymasters carry on merrily plundering nature for their own selfish and psychopathic ends.

Flashback: Fmr. UN climate head predicted COVID lockdowns?!: ‘The only way a 2015 agreement can achieve a 2-degree goal is to shut down the whole global economy’

COVID and Climate Models Will Not Save Us: ‘COVID-19 models predicting millions of deaths are similar to climate models — both computer-generated model types have been consistently wrong’