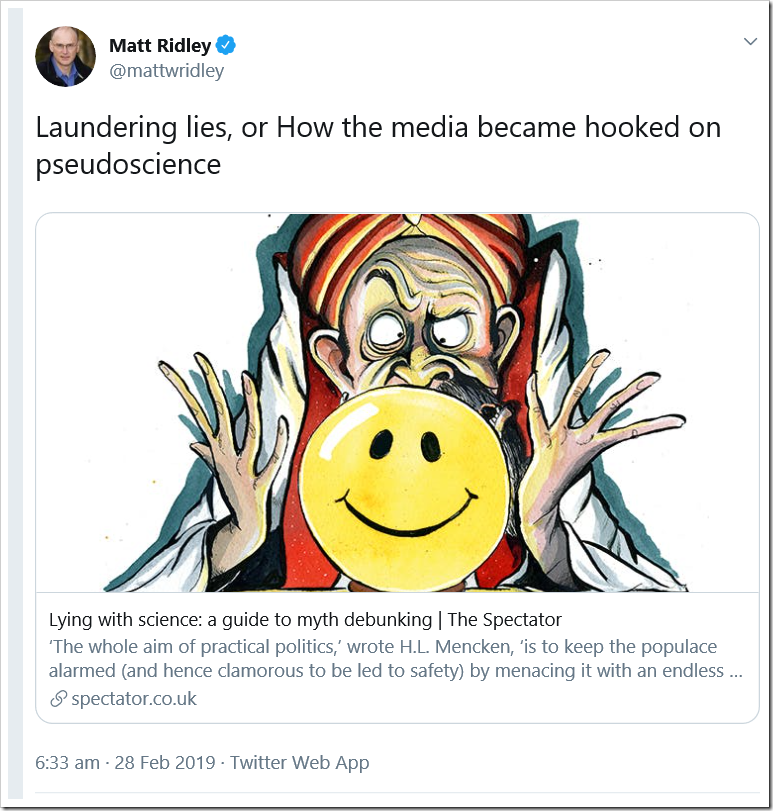 Matt Ridley has thought provoking article in the Spectator today:

‘The whole aim of practical politics,’ wrote H.L. Mencken, ‘is to keep the populace alarmed (and hence clamorous to be led to safety) by menacing it with an endless series of hobgoblins, all of them imaginary.’ Newspapers, politicians and pressure groups have been moving smoothly for decades from one forecast apocalypse to another (nuclear power, acid rain, the ozone layer, mad cow disease, nanotechnology, genetically modified crops, the millennium bug…) without waiting to be proved right or wrong.

Increasingly, in a crowded market for alarm, it becomes necessary to make the scares up. More and more headlines about medical or environmental panics are based on published scientific papers, but ones that are little more than lies laundered into respectability with a little statistical legerdemain. Sometimes, even the exposure of the laundered lies fails to stop the scare. Dr Andrew Wakefield was struck off in 2010 after the General Medical Council found his 1998 study in the Lancet claiming a link between the MMR vaccine and autism to be fraudulent. Yet Wakefield is now a celebrity anti-vaccine activist in the United States and has left his long-suffering wife for the supermodel Elle Macpherson. Anti-vax campaigning is a lucrative business.

Meanwhile, the notion that chemicals such as bisphenol A, found in plastics, are acting as ‘endocrine disruptors’, interfering with human hormones even at very low doses, started with an outright fraudulent study that has since been retracted. Many low-quality studies on BPA have pushed this theory, but they have been torpedoed by high-quality analyses including a recent US government study called Clarity. Yet this is of course being largely ignored by the media and the activists.

So the habit of laundering lies is catching on. Three times in the past month, pseudo-science flew around the world before the scientific truth had got its boots on (as Mark Twain did not say, but Jonathan Swift almost did): in stories about insect extinction, weedkiller causing cancer, and increased flooding. The shamelessness of the apocaholics is increasingly blatant. They know that even if a story of impending doom is thoroughly debunked, the correction comes too late. The gullible media will have relayed the headline without checking, so the activists have made their fake-news hit, perhaps even raised funds on the back of it, and won.

The article, which should be viewable online, covers three recent examples of pseudo science, two of which will be familiar to readers of this blog.

Below are the relevant extracts:

Take the story on 10 February that ‘insects could vanish within a century’, as the Guardian’s Damian Carrington put it, echoed by the BBC. The claim is, as even several science journalists and conservationists have now reported, bunk.

The authors of the study, Francisco Sánchez-Bayo and Kris Wyckhuys, claimed to have reviewed 73 different studies to reach their conclusion that precisely 41 per cent of insect species are declining and ‘unless we change our way of producing food, insects as a whole will go down the path of extinction in a few decades’. In fact the pair had started by putting the words ‘insect’ and ‘decline’ into a database, thereby ignoring any papers finding increases in insects, or no change in numbers.

They did not check that their findings were representative enough to draw numerical conclusions from. They even misinterpreted source papers to blame declines on pesticides, when the original paper was non-committal or found contradictory results. ‘Several multivariate and correlative statistical analyses conﬁrm that the impact of pesticides on biodiversity is larger than that of other intensive agriculture practices,’ they wrote, specifically citing a paper that actually found the opposite: that insect abundance was lower on farms where pesticide use was less.

They also relied heavily on two now famous recent papers claiming to have found fewer insects today than in the past, one in Germany and one in Puerto Rico. The first did not even compare the same locations in different years, so its conclusions are hardly reliable. The second compared samples taken in the same place in 1976 and 2012, finding fewer insects on the second occasion and blaming this on rapid warming in the region, rather than any other possible explanation, such as timing of rainfall in the two seasons. Yet it turned out that there had been no warming: the jump in temperature recorded by the local weather station was entirely caused by the thermometer having been moved to a different location in 1992. Whoops.

Talking of payouts, the third inexactitude to fly around the world two days later was the claim by the left-leaning political thinktank the Institute for Public Policy Research (IPPR) that, ‘Since 2005, the number of floods across the world has increased by 15 times’, which was directly quoted by the BBC’s Roger Harrabin, in the usual headline-grabbing story about how we are all doomed.

This was (to borrow a phrase from Sir Nicholas Soames) ocean-going, weapons-grade, château-bottled nonsense. There has been no increase in floods since 2005, let alone a 15-fold one. When challenged, IPPR said it was a ‘typo’, and that it meant since 1950. Well, that is nonsense, too. The Intergovernmental Panel on Climate Change regularly reviews data on floods and says it can find no trend: ‘In summary, there continues to be a lack of evidence and thus low confidence regarding the sign of trend in the magnitude and/or frequency of floods on a global scale.’

Fortunately, the IPPR gave a source for its absurd claim. This was ‘GMO Analysis of EM-DAT 2018’. Paul Homewood, a private citizen who regularly catches climate alarmists out, explained in a blog what this meant. EM-DAT is a database of disasters that is wholly worthless as a source for such a claim, as it admits, because it only includes very small disasters such as traffic accidents but only for recent years. There is no evidence here of a trend at all.

GMO is a big Boston asset management firm, whose founder and owner, Jeremy Grantham, just happens — you guessed it — to fund the Institute for Public Policy Research.

The full article is well worth a read though.

Incidentally, GWPF have now sent a formal complaint to the PNAS, publishers of the Puerto Rico paper, demanding full retraction due to fundamental flaws.