Although hundreds had previously gathered to oppose plans for a mosque, Islamic school, and Muslim-only cemetery in Newton County, they were forced show the community once again that they will stand against Islamic infiltration.

An entitled community of Muslims in Georgia announced a town meeting with the purpose of building a Muslim-only cemetery, an Islamic school, and yet another mosque, despite the city’s growing concern of homegrown terrorism. However, the demanding Muslims immediately canceled their gathering and dispersed when they realized who was coming to town.

For 1,400 years, Islamic conquest has been the same — migrate, infiltrate, and conquer. The only difference between most modern-day Islamic conquest and theprophet Muhammad’s warring and butchery is that many are taking over nations through political correctness, birth rate, and conversion. This is called “Hijrah,” which is considered migration jihad to spread Islam and establish Sharia law until, as the Quran commands, “the religion, all of it, is for Allah.”

Of course, since Islam not only has no freedom of speech or religion but condemns to death many who practice these rights, the so-called moderate Muslims in a small Georgia town were shocked and offended when a group of patriots decided to show them how Western law works.

After a Muslim community in Newton County stealthily proposed plans to construct another mosque, along with an Islamic cemetery and madrassa, locals sprang into action. The Express reports that the non-Muslim majority responded to the proposals by marching on the town square with firearms in tow to not only protest the construction of the Islamic facilities but also to demonstrate the American freedoms that are opposed by Islamic fundamentals and outlawed under Sharia law.

Newton County Muslims were apparently so appalled at the peaceful demonstration that they immediately called off the town meeting over a proposed mosque and attached religious school. Of course, the terror-tied Council on American-Islamic Relations and ignorant leftist sympathizers instantly attempted to paint the nonviolent protesters as “racist” and “Islamophobic.”

“County leaders shouldn’t allow themselves to be bullied into canceling a public meeting on a controversial issue,” CAIR spokesman Edward Ahmed Mitchell said. “A small group of anti-Muslim extremists were able to frighten a government body into canceling a public meeting. That sends a dangerous message about the power of fringe extremists to affect elected officials.”

What Mitchell refuses to admit is that if the terrorists and those who support the violent commands in the Quran are actually the minority, why hasn’t the majority of supposed peace-loving, tolerant Muslims waged any form of jihad against them? Instead, they condemn the peaceful non-Muslims who openly stand against Islamic terrorism and subjugation, calling their demonstration of American rights and values “Islamophobic.” In doing this, they prove that our constitutional freedoms really are un-Islamic and cannot coexist with Sharia. 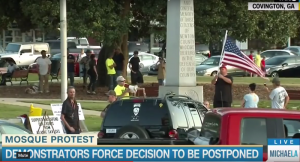 Dozens of armed protesters peacefully gathered to support our constitutional rights and oppose Sharia law, a demonstration that prompted the Muslim community to cancel their meeting.

Fortunately, there are still bold Americans who understand this and refuse to stand by while Islamic laws and customs attempt to silence our freedom of speech.

“It’s a declaration of war against United States of America. Their ultimate goal is to impose Sharia law,” protester Jim Stachowiak explained.

“The Quran is nothing but hate speech,” Philip Morris said, referring to the Quran’s 109 verses of violence.

Sadly, an ignorant Christian defended Islam and its requirement to wage war against those Christians and Jews who refuse to convert or pay jizya, saying that defending Muslims’ right to “worship” keeps “our right to worship safe as well.” Unfortunately, she has chosen to remain blind to the fact that not one Muslim nation offers these rights to the religious majorities under their own religion’s law.

What leftists who support Islam refuse to acknowledge is that the very fundamentals upon which their liberal beliefs are based are the most condemned and outlawed under Islamic law. Abortion, LGBT rights, gender equality, and freedom from religious oppression are not only banned and punished under Sharia, those who practiced them were often executed and enslaved by Muhammad himself, modeling the first system for political Islam.

While leftists and moderate Muslims claim that the opposition to mosques and Islamic schools infringes upon religious rights, it is Islam that is unlike any other religion. Instead of being a faith that requires adherence to its laws solely from its willing followers, Islam is a militant faith with a political system that’s Quran-based laws are “for all.” This is why the religious minorities are required to wear hijabs, abstain from premarital sex, and refrain from criticizing Islam in Muslim-majority countries.

Although self-destructive leftist paint these protesters as being anti-Muslim bigots, the demonstrators are even defending their rights to continue supporting the things that their beloved Muslim minority is constantly preaching and legislating against. Unfortunately, liberals are too self-absorbed to see this and continue to advocate on behalf of a religion and intertwined set of laws that will eventually outlaw everything they represent.