Sen. Harry Reid had a meltdown recently on CNN because GOP presidential nominee Donald Trump had surged in the polls. Based on no real evidence, Reid claimed that because Trump was winning, the polls must be unfair.

The Gateway Pundit reported that a new NBC News/Wall Street Journal poll showed that Democrat nominee Hillary Clinton had a six-point lead on Trump. But once again, conservatives have real, legitimate proof that the polls are rigged in the Democrats favor.

Of course, the liberal media and the Never Trumpers loved this news, but there was one major problem — the poll was weighted heavily in the Democrats favor with 14 percent more Democrat voters polled than Republicans. 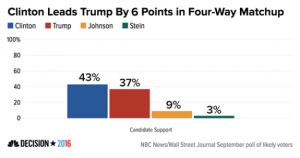 The question asked “A lot of people are unable to get out and vote for many reasons. Did you happen to vote in the November 2012 election for president? (IF “YES” ASK:) For whom did you vote – Barack Obama, Mitt Romney, or someone else?”

This is where the bias was revealed: 47 percent of respondents in the poll voted for Obama in the last election, whereas 33 percent voted for Romney.

Side note: one percent were “not sure.” Perhaps those geniuses should have been excluded if they aren’t sure who they voted for just four years prior.

Maybe they had a concussion like Clinton and simply “couldn’t recall.”

The 14-point gap between respondents didn’t reflect the outcome of the 2012 election either; Obama beat Romney by 3.9 percent in 2012.

These rigged polls are used to influence public opinion. Polls in Clinton’s favor, especially with such a spread, could very well influence low-information voters to sit out and not vote for Trump because they think there’s no point. Then again, they could also lull Clinton voters into thinking they don’t need to get out and vote.

Bottom line, the media is using these rigged polls to create a narrative and voters need to know about it.

Clinton has had an abysmal couple weeks on the campaign trail whereas Trump has been nearly flawless for nearly a month — and many of the polls, those that haven’t been rigged in the Democrat nominee’s favor, reflect this.

The first debate is coming up in less than a week on Monday Sept. 26, and Trump has the opportunity to absolutely annihilate Clinton with debate topics that should be a slam dunk for him: “America’s direction,” “achieving prosperity,” and “securing America,” according to The Hill.