Actor Rob Lowe took to Twitter on the eve of the Sept. 11 anniversary to share a brilliant idea with the NFL on dealing with players who planned to either kneel or remain seated as the national anthem was played the next day during the start of their respective games.

“Any player wants to boycott the anthem on 9/11 should be asked to remain in the locker room until kickoff,” he tweeted directly to the NFL. “It’s not their moment.”

Players willfully choosing to co-opt such an important moment was unacceptable and should not have been tolerated, period.

Kudos to Mr. Lowe for understanding this.

He of course received immediate blowback from disgruntled liberals, who tried to lecture him about the First Amendment, claiming that it empowered players with the right to do whatever they wanted.

Luckily for him, however, actor Nick Searcy was ready to offer backup. 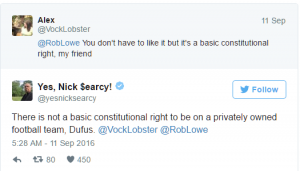 In a series of blunt replies to Lowe’s haters, Searcy reminded them that a private business’s right to protect itself and its well-being trumped employees’ right to say or do anything they desired.

“A private business can fire anybody they want,” he added in one Tweet. 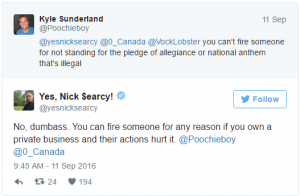 A private business also has the right to stop employees from expressing viewpoints contrary to its mission statement. And if the employees didn’t like it, they can quit and work somewhere better aligned with their values. This is what real freedom looks like, folks.

Regardless, the NFL chose not to take Lowe’s advice, as a number of NFL players from the Miami Dolphins, the Seattle Seahawks and the Kansas City Chiefs were reportedly observed on the field either kneeling or locking arms during the playing of the national anthem.

With this despicable behavior becoming more commonplace because of Colin Kaepernick, the San Francisco 49ers backup quarterback who started this fiasco, the NFL may soon find its own business hurting — because I have a feeling that many of its customers — and sponsors — do not like these antics one bit.

Grown ups having tantrum is not normal. The Frontal Lobe of the brain is not fully developed .. Usually a sign of having been traumatized or abused as a young child.