North Korea has threatened to launch an intercontinental ballistic missile ‘any time and anywhere’ as retaliation for US ‘hostilities’. Dictator Kim Jong Un claimed on New Year’s Day that his nuclear-capable country is close to test-launching an ‘ICBM’. But officials in Washington say that if Pyongyang launches anything that threatens the territory of the US or its allies, it will be shot down.

A North Korean Foreign Ministry spokesman said: ‘The ICBM will be launched anytime and anywhere determined by the supreme headquarters of the DPRK. The North is formally known as the Democratic People’s Republic of Korea.
US Defence Secretary Ash Carter said on Sunday that North Korea’s nuclear weapons capabilities and ballistic missile defence programs constituted a ‘serious threat’ to the United States and that it was prepared to shoot down a North Korean missile launch or test.

‘We only would shoot them down … if it was threatening, that is if it were coming toward our territory or the territory of our friends and allies,’ Carter said during an appearance on NBC’s ‘Meet the Press’ program.
The United States said on Jan. 5 that North Korea had demonstrated a ‘qualitative’ improvement in its nuclear and missile capabilities after an unprecedented level of tests last year.
North Korea has been testing rocket engines and heat-shields for an ICBM while developing the technology to guide a missile after re-entry into the atmosphere following a liftoff, experts have said. 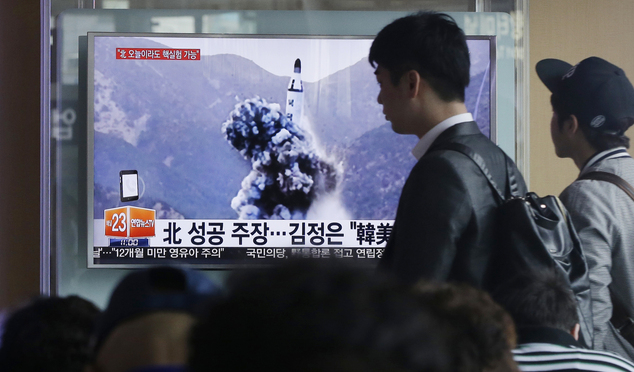 While Pyongyang is close to a test, it is likely to take some years to perfect the weapon, according to the experts.
Once fully developed, a North Korean ICBM could threaten the continental United States, which is around 5,500 miles from the North. ICBMs have a minimum range of about 3,400 miles, but some are designed to travel 6,200 miles or farther.
On Monday, South Korean defence ministry spokesman Moon Sang-gyun called North Korea’s statement a ‘provocative announcement’ and told a regular news briefing that Pyongyang would face stronger sanctions if it were to launch an ICBM.
Unification Ministry spokesman Jeong Joon-hee said there were no signs of any launch preparations.
US President-elect Donald Trump responded to Kim’s comments on an ICBM test by declaring in a tweet last week: ‘It won’t happen!’ 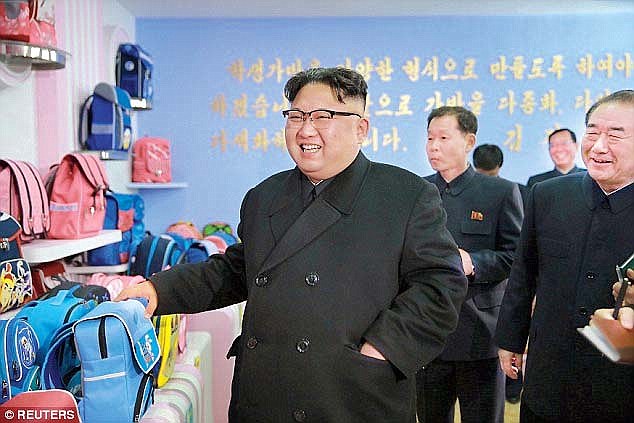 North Korea has been testing rocket engines and heat-shields for an ICBM while developing the technology to guide a missile after re-entry into the atmosphere following a liftoff, experts have said

Asked for comment on Sunday, the White House referred to January 3 comments by White House press secretary Josh Earnest in which he said the US military believed it could protect against the threat emanating from North Korea.
In that briefing, Earnest also touted the defensive measures the United States had taken to guard against the threat, such as anti-ballistic missile facilities that had been installed around the Pacific region and diplomatic pressure to discourage North Korea from pursuing its nuclear program.
A US State Department spokesman said last week that the United States did not believe that North Korea was capable of mounting a nuclear warhead on a ballistic missile.
North Korea has been under U.N. sanctions since 2006 over its nuclear and ballistic missile tests. The sanctions were tightened last month after Pyongyang conducted its fifth and largest nuclear test on September 9.
‘The U.S. is wholly to blame for pushing the DPRK to have developed ICBM as it has desperately resorted to anachronistic policy hostile toward the DPRK for decades to encroach upon its sovereignty and vital rights,’ KCNA quoted the spokesman as saying.
‘Anyone who wants to deal with the DPRK would be well advised to secure a new way of thinking after having clear understanding of it,’ the spokesman said, according to KCNA.