New York Times political reporter Jeremy Peters on Saturday joined the odd new trend in the mainstream press of attacking Fox News for actually covering political stories besides Donald Trump — especially those involving Hillary Clinton’s and Russia. Fox and other right-leaning outlets were also mocked for not obsessing as much as the rest of the press on President Trump’s Russia controversies in “As Russia Inquiry Widens, an Alternative Narrative Emerges on the Right.”

Another Times article accuses the network of “pushing its own version of reality,” as if that’s not what the Times does every day. It’s apparently easier to write criticism of other media outlets than to actually cover scandals involving Hillary Clinton and Russia.

This week, as Mr. Mueller made his first significant public moves in his inquiry, announcing charges against three advisers to Donald J. Trump’s presidential campaign, an alternative narrative was not hard to find in the conservative news media. Be it Fox News, talk radio or the growing number of websites that write about politics from a Trump-friendly point of view, the focus was on what they see as the scandal and wrongdoing of President Trump’s political opponents.

In reports like these, Bill and Hillary Clinton are prominent and recurring characters because they are considered the real conspirators working with the Russians to undermine American democracy.

The accusations of corruption target different aspects of the Clintons and their three decades on the national political scene. But one primary objective of many of the stories circulating on the right seems clear: to discredit Mr. Mueller and his inquiry to the point that Americans come to see it as the partisan witch hunt Mr. Trump insists that it is.

Much of this news coverage in the last several days has focused on two reports that Mr. Trump’s defenders say point to evidence that Mrs. Clinton and her campaign benefited from cultivating ties to Russians.

Reports that the paper has done its best to ignore.

The State Department has said that decisions to approve deals like the one in question generally do not rise to the level of the secretary, meaning it is unlikely that Mrs. Clinton would have known anything about it. And the uranium in question is not exported for use overseas, meaning that Russians could not use it for nuclear weapons.

The second report that Mr. Trump’s defenders have seized on was the disclosure that the Democratic National Committee and Mrs. Clinton’s presidential campaign, through their law firm, paid for research that was included in a dossier that contained salacious claims about connections between Mr. Trump, his associates and Russia. (A conservative website backed by a major Republican donor first hired the research firm that months later produced the dossier for Democrats.)

Why Mr. Hannity believes Mrs. Clinton should be indicted is unclear. His implication seems to be that because the information in the dossier was apparently gleaned from interviewing Russians, that amounts to collusion.

Peters, before any further investigation, knows that Hillary Clinton’s involvement was “distant.”

Fox & Friends, the president’s go-to morning news program and a loyal defender of the Trump administration, also appeared unimpressed. In the minutes after the indictments were announced on Monday morning, as CNN and MSNBC went live with uninterrupted coverage, Fox & Friends was on a commercial break.

Indeed, criticizing coverage decisions by Fox News, to the point of human callousness, is a hobby among Times’ reporters, and has become an obsession of late. The Times actually put three reporters on the case of exhaustively monitoring how Fox News covered the breaking news of the recent Mueller indictments last Monday morning: “Trump Loves ‘Fox & Friends.’ Here’s Why.”

President Donald Trump is an avid viewer of Fox News and its morning program “Fox & Friends,” which is seen as offering more favorable coverage of the administration than other news outlets. His early morning tweets often reference coverage on the program.

The reasons behind his affection for the network and its flagship morning program were apparent on Monday, when Mr. Trump’s campaign associates Paul Manafort and Rick Gates were indicted as part of the investigation by the special counsel Robert Mueller into Russian meddling in the 2016 election.

The way each network covered the story – or avoided it – is a sign of how the media landscape has become ever more politicized in the Trump era. That is particularly true of Fox News.

Fox News aired 25 minutes of indictment coverage in the first hour after news of the charges broke around 8 a.m. — just as attention would have surged. CNN and MSNBC, in contrast, aired at least an hour of nearly uninterrupted and ad-free coverage.

So CNN and MSNBC can’t be accused of liberal overkill?

While major network news channels claim to be unbiased, Americans see them as having political leanings. A survey from Pew Research Center found that Fox was more trusted by conservatives, while MSNBC was more trusted by liberals and CNN was considered somewhere in the middle. In their coverage, the channels tend to confirm their viewers’ perceptions.

Significant breaking news can sometimes subdue those leanings, as networks scramble to air whatever information they have on a mass shooting or hurricane. But in the case of political stories like this one, it seems newsworthiness can’t trump ideology.

But only Fox has ideology, apparently.

….While CNN, MSNBC and the BBC are typically in alignment, Monday morning was a particularly stark example of how Fox News pushes its own version of reality.

The reporters finally, briefly addressed the other side:

To right-leaning media observers, the coverage by the other networks might seem equally troubling: does the Manafort indictment deserve an hour or more of uninterrupted airtime?…

Adding to the Times’ festival of attacks on Trump and his defenders was anti-Trump columnist Bret Stephens, with a vaguely argued rant in Saturday’s edition, “The Sleazy Case Against Mueller’s Probe.”

Never before has the fake news media been so blatantly phony, and now, they’re refusing to cover anything negative about Hillary Clinton.

On the rare occasion that the mainstream media does feature any negative Clinton coverage, they downplay it.

Do you think if it was proven that President Trump rigged the GOP primary, the media would cover it?

Newt Gingrich calls out the fake news media for covering up for Hillary.

How can all 3 networks ignore Donna Brazile's devastating report that DNC was owned by Clinton throughout primaries with Sanders? Amazing 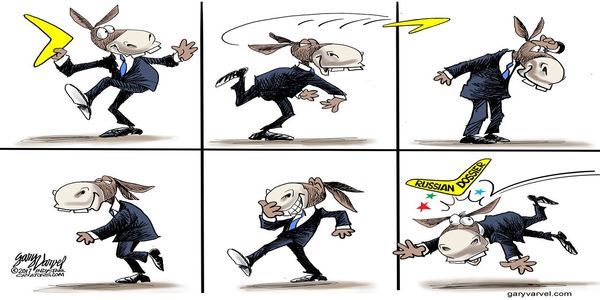