Donald Trump has faced an uphill battle since he announced his candidacy. However, it seems that during the steepest part of his climb for the White House, he’s getting some added attention after what was spotted in the crowd at a California rally – and a photo of the matter is taking social media by storm.

We all know that Trump’s campaign is now head and shoulders above Hillary Clinton’s, as hers is quickly sinking, but no one has made that clearer than the Republican candidate’s supporters. Proving just how much more love there is for Trump than the media would have you believe, Skylar Nilsson showed up to a rally in Anaheim, California, wearing quite the epic shirt. 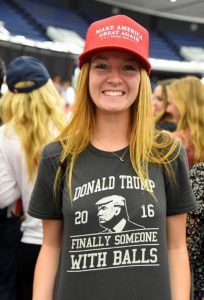 Although the incident took place back in May, an image of her wearing a shirt that reads, “Donald Trump, finally someone with balls,” is just starting to spread around social media like wildfire. Of course, the sentiments expressed on the shirt have been proven true ten-fold since the time the photo was taken. Trump has fought tooth and nail every step of this election against a biased media.

America has watched as Trump has been unfairly beaten over the head by Hillary, her supporters, and the vast majority of the mainstream media. However, current reportsindicate that the race is neck-and-neck, and there’s just one simple reason Trump wasn’t easily defeated with the deck stacked against him – the size of those magnificent cojones.

You need big balls to stand up against this

Of course, we’re not actually talking about Donald Trump’s genitalia but rather the courage and ambition he’s shown to fight against the establishment despite all odds being stacked against him. In spite of this reality, the man has still surged ahead to the point that he actually stands a chance at taking down crooked Hillary Clinton and her gang of criminal cohorts.

This nation is at a crossroads of destruction and revolt, and We the people seem to be split right down the middle regarding which path to take. However, because of Trump’s unwavering determination and faith in his supporters, half the nation actually stands a chance of being represented – and that’s saying something, considering what he’s been up against from the beginning.