A rendering of the recently discovered Promacrauchenian.  (Courtesy of Daniel Boh, Municipal Museum of Miramar.)

Researchers in eastern Argentina have discovered the remains of a strange creature that lived three million years ago, some 280 miles south of modern-day Buenos Aires.

One of the team members, Daniel Boh described the animal, an hervibore mammal, as a mix “of a horse and an elephant; like a camel with a trumpet.”

Boh, who runs the Municipal Museum Punta Hermengo of Miramar, said they have been able to determine the creature is from the Promacrauchenian family and lived in the Pliocene, an era ruled by mammals and birds of great size.

This is some 62 million years after dinosaurs roamed the Earth.

“The discovery is important because there were no previous records of this animal in the area,” Boh told FoxNews.com in an email.

“It is rare, so it is of scientific interest and also helps to understand the environmental and geographic changes in the region.”

The prehistoric mammal was 5.2 feet tall and more than 8 feet long; it weighed around 1,100 pounds.

It appears to have had some kind of amphibian abilities.

“The short trumpet would serve as a prehensile lip (similar to the tapir) to [allow it to] remain submerged, and also to condition the air and as a tool of general use,” said Mariano Magnussen, a technician working on the fossils, to local newspaper Clarin.

He said that it shares many morphological adaptations with the Giraffidae, to which it is not directly related to. Magnussen said this is a result of “an adaptive convergence or a parallel evolution.”

The fossils were found on the side of a cliff, not far from a golf course overlooking the Atlantic Ocean. Boh said they will continue to visit and study the area. “The sea waves will continue to erode [the cliff] and is sure to expose remains that we have not yet seen and are supposed to be there,” he told FoxNews.com.

Researchers had previously recovered here several remains of a more modern specimen, the Macrauchenia   ̶̶  known colloquially as “long llamas”  ̶̶  which lived until about 8,000 years ago.

The fossils will be kept in the Miramar museum, where they are being processed.

“The remains we found are very fragile,” Boh said. “[We found] a fragment of a skull, parts of a front leg – like phalanges and carps – which allow us to know how it walked or if it ran, as well as a femur and vertebrae.” 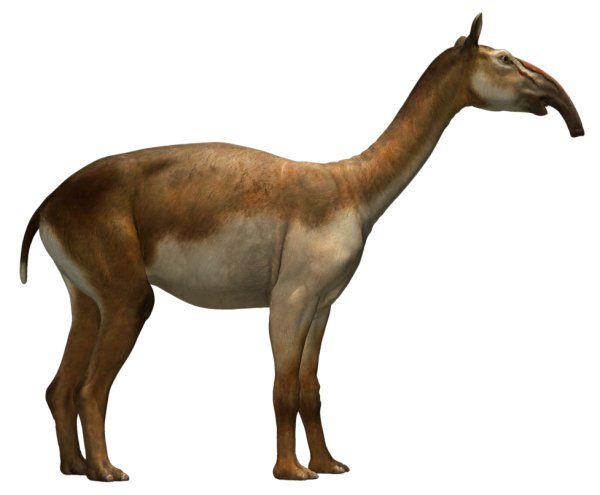