The shocking admission came from the president of the National Border Patrol Council, an association of border patrol agents. Council president and Agent Hector Garza said they are “trying to do our jobs as best we can with the very limited resources we have.”

Garza told the Fox News Channel that their job is increasingly difficult with the lack of resources they receive for patrolling the border.

“We do not have enough vehicles for our agents to patrol with, we do not get the manpower that we need.” He continued by discussing the lack of proper infrastructure to safely do their jobs – including communications equipment, tower cameras and weapons.

“Through executive orders and prosecutorial discretion… Most of the people that we apprehend end up getting released into the country,” he said while expressing his frustration. He explained that with the limited amount of manpower available, “It is very difficult to adequately patrol the border.”

“Keep in mind,” Garza continued, “if we don’t have enough agents out there, there are going to be people who are going to get away – and we don’t know who those people are. The only people that we know who they are the ones we are actually catching.”

Donald Trump has promised to secure the border with Mexico by building a “big, beautiful” impenetrable wall and dramatically increasing the number of border patrol agents assigned at the border. Because of this aggressive border policy, Garza’s group, the National Border Patrol Council, has endorsed Donald Trump.

It was the first time the agency has endorsed a president. “Mr. Trump will take on special interest and embrace the ideas of rank-and-file Border Patrol agents rather than listening to the management yes-men who say whatever they are programmed to say,” the wrote. “This is a refreshing change that we have not seen before – and may never see again.”

There is no greater physical or economic threat to Americans today than our open border. And there is no greater political threat than the control of Washington by special interests. In view of these threats, the National Border Patrol Council endorses Donald J. Trump for President – and asks the American people to support Mr. Trump in his mission to finally secure the border of the United States of America, before it is too late. 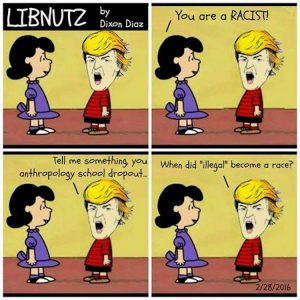