Terminator wants to Terminate skeptics:
Arnold Schwarzenegger again threatens skeptics: ‘I would like to strap their mouth to the exhaust pipe of a truck, turn on the engine and let’s see how long it would take them to tap out.’

Schwarzenegger made the carbon monoxide threat to political leaders who want to stop the EPA from regulating carbon dioxide.

Schwarzenegger declared in the video: “Some politicians even want to shut down the EPA’s ability to regulate carbon. I would like to strap their mouth to the exhaust pipe of a truck, turn on the engine and let’s see how long it would take them to tap out.” (Full Video of Schwarzenegger here.) 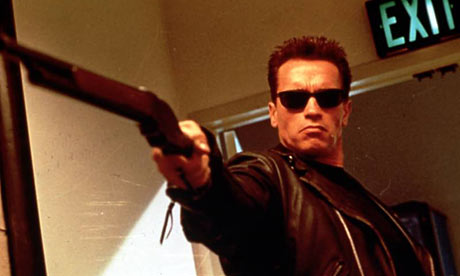 Schwarzenegger’s death wish is not the first time climate skeptics have been threatened with deadly carbon monoxide.

See: Climate Depot’s 2010 Presentation at Warmists’ Summit Met By Hostile Interrupting Moderator and Crowd; Call for Morano to Kill Himself! – Global Warming Summit’s Warm Welcome: Morano told to drive car into garage with engine running and then close the doors – “One participant confused carbon dioxide with carbon monoxide. She suggested I kill himself by driving my car into my garage and then close the doors with the engine running. I twice attempted to explain to the ARDAY conference participant that there was a difference between carbon dioxide — a harmless trace essential gas we exhale from our mouth– and toxic carbon monoxide, but to no avail.”

Flashback: Warmist suggests skeptical  Meteorologist  Anthony Watts ‘park his gas guzzler in the garage, close all the doors and leave his engine running’

Flashback: ‘Execute’ Skeptics! Shock Call To Action: ‘At what point do we jail or execute global warming deniers’ — ‘Shouldn’t we start punishing them now?’

CO2 is not ‘pollution.’ The term ‘carbon pollution’ is unscientific and misleading. As James Agresti wrote: “The phrase conflates carbon dioxide with noxious chemicals like carbon monoxide and black carbon.” “The phrase ‘carbon pollution’ is scientifically inaccurate because there are more than ten million different carbon compounds, and the word ‘carbon’ could refer to any of them. Some of the more notorious of these compounds are highly poisonous, such as carbon monoxide (a deadly gas) and black carbon (the primary ingredient of cancerous and mutagenic soot). Using a phrase that does not distinguish between such drastically different substances is a sure way to misinform people.” Carbon Dioxide – CO2 – is a harmless trace essential gas in the atmosphere that humans exhale from their mouth (after inhaling oxygen). Princeton Physicist Dr. Will Happer has said: “To call carbon dioxide a pollutant is really Orwellian. You are calling something a pollutant that we all produce. Where does that lead us eventually

#
Schwarzenegger Claims of 7 million killed by pollution is very suspect
Professor: EPA health claims ‘are groundless’ – ‘Carbon dioxide is not a factor in smog or lung issues’

McKitrick on Air Pollution: The models get ‘more deaths from air pollution than you were death from all causes’ – ‘Particulates and soot are at such low levels in the U.S. — levels well below what they were in the 1970s. The health claims at this point are groundless coming from this administration.
I noticed these numbers coming up for Ontario for how many deaths were caused by air pollution. What struck me — was knowing that air pollution levels were very low in Ontario — but they were extremely high in 1960s. So I took the same model and fed in the 1960s air pollution levels into it: How many deaths would you get? I did the calculations and you quickly get more deaths from air pollution than you were death from all causes.
In other words, the streets would have been littered with bodies from air pollution if it was actually that lethal. The problem with all of these models is they are not based on an actual examination of death certificates or looking at what people actually died of — these are just statistical models where people have a spreadsheet and they take in an air pollution level and it pops out a number of deaths. But there are no actual bodies there, it is all just extrapolation.’
#

Flashback 2010: Climate Depot’s Presentation at Warmists’ Summit Met By Hostile Crowd; Call for Morano to Kill Himself! — ‘Morano told to drive car into garage with engine running and then close the doors’

Flashback: Warmist suggests skeptical  Meteorologist  Anthony Watts ‘park his gas guzzler in the garage, close all the doors and leave his engine running’

‘Execute’ Skeptics! Shock Call To Action: ‘At what point do we jail or execute global warming deniers’ — ‘Shouldn’t we start punishing them now?’