Weeks after a Swedish mainstream newspaper conducted a study finding that migrants make up the majority of those convicted for gang rape, a second Swedish title has revealed another study revealing the same results.

The new study, which looked at 112 men and boys found guilty of gang rape, showed that the vast majority of convicts, 82 in total, were born in a different country Aftonbladet reports.

While gang rapes are a small percentage of overall rape cases, with 29 out of 286 rape victims in 2016 claiming they had been raped by multiple men, the statistics confirm an earlier report in March by Swedish tabloid Expressen who conducted a similar study finding 32 out of 43 gang rape convicts were migrants.

One of the biggest revelations of the Aftonbladet study was that gang rapes have increased dramatically in the last four years, with eleven individuals convicted in 2013, compared to 29 in 2017.

According to the newspaper, many experts were not shocked that migrants were so overrepresented in gang rape cases.

“I do not question that there is a clear overrepresentation. That there are cultural differences I do not exclude. But how much does it play? There are very few cultures that allow that kind of behaviour,” said Criminology professor Henrik Tham.

Jerzy Sarnecki, also a criminology professor, claimed that the reason for so many migrants being convicted of gang rape was because of discrimination by the Swedish justice system, claiming that police were more likely to investigate migrant crime.

While Swedish citizens made up the largest number of convicts at 43, followed by Afghans, Iraqis and Somalians, only 27 wqw3ere born in Sweden and of those only 13 had two Swedish parents.

The study confirms what many Swedes working in the justice system and in law enforcement have claimed in the recent past including whistleblower police officer Peter Springare who faced public backlash after claiming that migrants committed most of the serious crime in the country.

This is likely because 92% of the rapes in Sweden are committed by migrants, and the Swedish government and media are intent upon concealing such information and keeping people ignorant and complacent regarding what is happening to their country because of the Muslim migrant influx.

But now this determination to keep people from thinking negative thoughts about the Muslim migrants in Sweden is actively interfering with public safety. 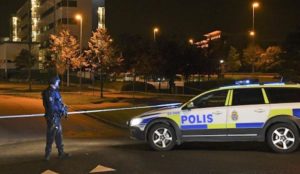 “Swedish child raped by ‘three men’ on her way home: Police refuse to give description of the perpetrators,” Voice of Europe, May 6, 2018:

A 10-year-old girl was attacked by three men after she left school and was on her way home. The child was raped at a cemetery in Östervåla, Sweden’s Aftonbladet reports.

It was Thursday, around 3 pm, that the terrible incident occurred. According to the police three perpetrators were involved. At least one of them raped the girl.

“No person has been arrested but we have received a good description of the perpetrators. We do not want to publish it in the media”, says police investigator Daniel Nilsson to SVT.