People march during a demonstration under the banner “Protect the climate – stop coal” two days before the start of the COP 23 UN Climate Change Conference hosted by Fiji but held in Bonn, Germany November 4, 2017. REUTERS/Wolfgang Rattay

UN climate chief Patricia Espinosa said “the very fabric of life on Earth is under threat” from global warming “We must act right here, right now,” Espinosa told delegates and activists gathered in Bonn, Germany for another round of climate talks.

In particular, UN climate bureaucrats are asking countries to be more ambitious in their plans to meet the Paris accord. That’s a request that experts expect will cost the world trillions of more dollars in the coming decades.

S&P Global Markets’ new report puts the price at $5.2 trillion to implement national-level plans to comply with the Paris agreement. But that figure is based on financial estimates individual countries submitted to the UN.

“Of the 189 countries that have submitted NDCs, only about 60 have included specific financial estimates of the costs, meaning the total would likely tally up far beyond the $5 trillion stated,” S&P reported, which adds that spending is not nearly enough to meet the goals of the Paris accord.

In signing the Paris accord, nearly 200 countries agreed to cut emissions enough to keep future global warming under 2 degrees Celsius by the end of the century. The accord’s stretch goal is keeping warming below 1.5 degrees Celsius.

The UN’s “emissions gap” report claims the world is only cutting emissions one-third of what’s needed to avoid “dangerous” global warming and comply with the Paris accord. Of course, that’s going to take more money.

S&P’s $5.2 trillion would be just a starting point in that case. Economists and policy experts have put forward a wide range of estimates on what it would cost to fight global warming.

A recent Stanford University report put the cost of meeting the Paris accord at $58 trillion over the next 25 years. That comes out to about $2.3 trillion a year for the next quarter century.

.. or do they just skip “Man Made” because that part doesn’t exist?

The science is clear, there’s no temperature increase in the atmosphere over the last 6 decades, ref.: 1875 coldest year in 10000 years and no warming for 58 years 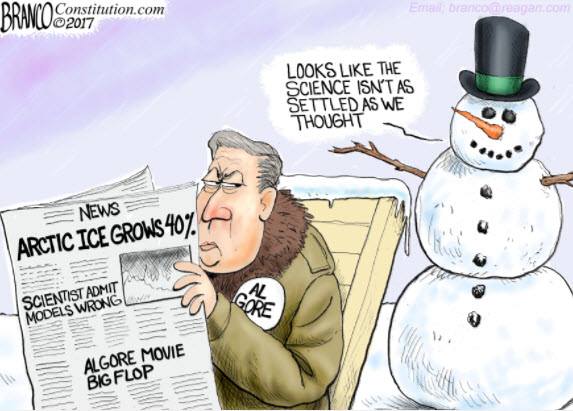 It’s All ‘Bout The Money