The Guardian canvassed one of the Florida neighborhoods Hurricane Irma rolled through to ask people about climate change, only to find citizens still don’t believe it’s that important.

Journalists at The Guardian asked citizens in the Marco Islands near Naples, Fla., if Irma’s destruction has influenced their position on global warming. They found Irma hasn’t really moved people to action on climate change.

“The question now is whether local residents, Floridians and by extension America writ large will ponder the lessons of Irma, consider its portent of intensifying extreme weather in the wake of climate change, and decide to do something about it,” The Guardian’s Ed Pilkington wrote Monday. “The early message coming from Marcos Islanders on Monday was crystal clear. No.”

Pilkington asked Marco Islander Chris Roche, 52, who was surveying the damage to his home, what he thought about the hurricane and climate change in general.

“They always tell us we will have a storm surge,” Roche said, referring to media warnings about possible catastrophic flooding from various hurricanes. “I know they are doing it for safety reasons, but I’ve never seen it happen.”

“I don’t think climate change is such a big deal,” he said after noting a somewhat cynical view of the media warnings from Gov. Rick Scott and others.

Pilkington was taken aback, suggesting Roche’s comment was “striking” considering a massive hurricane just rolled through his town. He noted that some people believe the global warming was a factor in creating Irma, which tore through the Caribbean islands before pounding Florida.

“I don’t think man is the tipping point. I think it’s more natural than that,” Roche added. “We’re not experiencing historically close [to] high temperatures, not even close to it.”

Another Floridian on the small island told The Guardian that he was not terribly impressed with Irma’s shock and awe.

“I really thought we were going to get hammered this time,” said John Sullivan, who was cleaning his yard when The Guardian approached him with questions. “Take away the downed trees and the missing roof tiles, for a cat[egory] 4 hurricane we could have done a whole lot worse.”

Some scientists urge people to temper their positions regarding the linkage between climate change and hurricanes.

Historian and climate analyst Phillip Klotzbach found that Irma’s size and power ranks a distant 7th to the Labor Day storm of 1935. In fact, Irma is tied with the 1928 Lake Okeechobee storm for the strongest hurricane in U.S. history.

Effective tools for measuring hurricanes did not come into existence until the late 1940s. 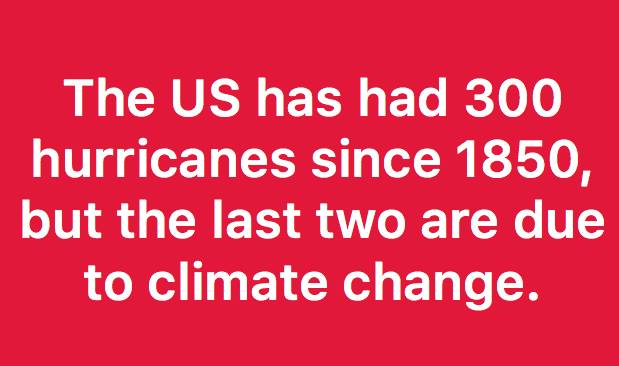 Another story about the normal, leftist STUPIDITY we all know too well

Note: This article contains coarse language that may offend some readers.

Bill Maher, host of HBO’s “Real Time with Bill Maher,” thinks it’s “unfair” for the state of Texas to receive federal aid in the aftermath of Hurricane Harvey and other natural disasters.

His explanation is even more infuriating.

As Maher sees it, Texas’s low tax base and government officials’ skepticism of human-caused climate change disqualify it — and other conservative states — from being “bailed out” by “more responsible folks” in the country:

“These places that got flooded, like Texas, okay, they have a low tax base. So, the federal government bails them out. Their governors, their legislators they don’t believe in climate science.

“Suddenly, socialism is not such a bad idea,“ Maher told panelists, ”when you’re standing in toxic floodwater”: