It is widely known that the summer of 1976 was by far the warmest in the Central England Temperature series.

What is much less known is that the next hottest was in 1826.

Curiously however, in 1982, when he wrote Climate, History and the Modern World, HH Lamb stated that 1826 was actually warmer than 1976. 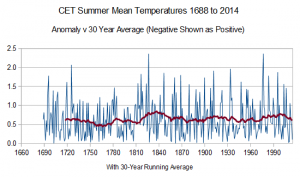 Funny how the past always seems to get cooler!