Theresa May has criticised European Union leaders who have been threatening Britain ahead of its Brexit negotiations, warning them that they “will sign up to a deal with us”. The Prime Minister hit out at EU leaders after they said they will make Brexit “very painful” for Britain to ensure the UK is worse off outside the bloc. A number of Eastern European nations have warned they will threaten Britain’s Brexit deal unless their citizens are given full access to live and work in the UK, something Government sources say will not happen.

Mrs May will on Tuesday address the UN and defend the Brexit vote, saying that the British people did not back Leave because they want to “turn inwards or walk away”. She will also warn world leaders that the referendum shows that voters want “a politics that is more in touch with their concerns”. 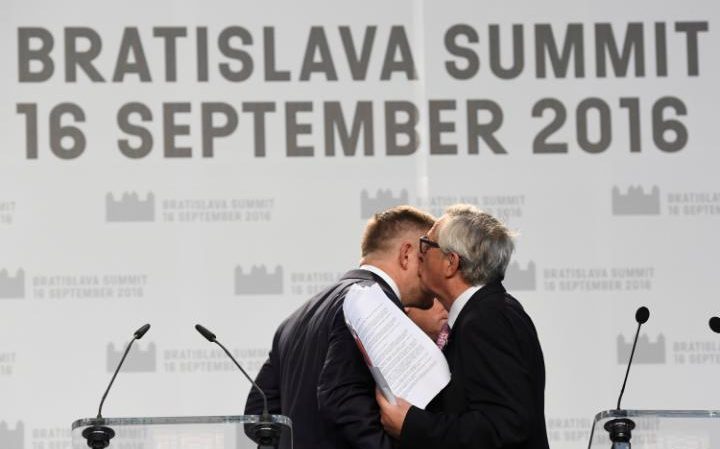 Robert Fico, Slovakia’s prime minister, on Monday said that member states intend to make it “very difficult for the UK” and said Britain is “bluffing” when it says it can get a good Brexit deal.

However, Mrs May dismissed those comments and said the 27 other EU members will sign up to “the deal that’s right for the UK”. Addressing the warnings made by EU leaders and asked whether it is a sign that they will refuse to do a deal with Britain, Mrs May said: “The 27 will sign up to a deal with us. “We will be negotiating with them and we will be ambitious in what we want to see for the United Kingdom. “It’s right for us to do that. But I think a good deal for the UK can also be a good deal for the other member states because I believe in good trading relations and I want the UK to be a global leader in free trade.” The Prime Minister added: “I had very constructive meetings with [Mr Fico] when I was doing my visits earlier in the summer.

“We’re going to be in a negotiation with the 27 members of the European Union about the relationship we will have with them when we leave the EU.

“I’ve said what I want to see is the deal that’s right for the UK. I think that will also be a deal that’s good for the member states of the European Union. “This is not just about us – it’s actually about relationships and trading within that European arena. So we will go into these negotiations and we will be ambitious for the UK.”