Related: ‘Climatic Change Throughout The Ages’ + Preparing For The Collapse

In 1941, the U.S. government explained why increasing levels of CO2 would not have a significant impact on the climate:

“IT WILL be news to many people that man, during his geo- logically brief existence on earth, has never known a “normal” climate. We are now at the tail end of an ice age and living in a period of crustal and climatic violence as great as any the earth has known. This is why we have to think so much about the weather. Such periods of revolution have occurred briefly several times in the history of the earth.

Much has been written about varying amounts of carbon dioxide in the atmosphere as a possible cause of glacial periods. The theory received a fatal blow when it was realized that carbon dioxide is very selective as to the wave lengths of radiant energy it will absorb, filtering out only such waves as even very minute quantities of water vapor dispose of anyway. No probable Increase in atmospheric carbon dioxide could materially affect either the amount of insolation reaching the surface or the amount of terrestrial radiation lost to space ..” Full article …

That is one reason why there’s no (Man Made) Global Warming, now called “Climate Change” due to lack of warming (i.e. empirically measured temperature rise with modern instruments, we’re not talking about the nonsense coming from the “Green” Rent & Grant Seeking Community of Activists and Criminals), the other main reason there’s no warming is because of Convection. The temperature potentials in the atmosphere is dictated by pressure, mass and gravity, full stop!.

Weather patterns are dictated by the sun, and this in a world with a surface of 71% oceans. Water temperature and currents are hugely influential when it comes to influencing both local and global temperatures.

CO2 play no part when it comes to weather or climate, not even in Australia!

By Viv Forbes via American Thinker

There is an ominous buzz in the new Australian Parliament — Albo and the Greens are planning to pass 40 new bills, quick smart.

Each bill will probably need 100 new regulations and 200 new inspectors, auditors, and enforcers plus many new taxes and fees.  They will not deliver “Net Zero” — they are “Net Negative.”  They will divert labor and capital from productive activities to bureaucracies and green energy speculators.

Where are the 40 old bills that Green-Albo will repeal to make room for these 40 wordy additions to Australia’s already overflowing legislative sewer?

We need a new political party dedicated solely to repeal of costly, destructive, and useless legislation.

Australia has thrived for over 200 years without Green-Albo’s forty new laws.  So they can be safely rejected or repealed, and followed out the door by most of the legislation introduced under the baleful gaze of the Green Quad — Gillard, Rudd, Turnbull, and Morrison.  A safe policy for the new Repeal Party is “Last in, First Out.” 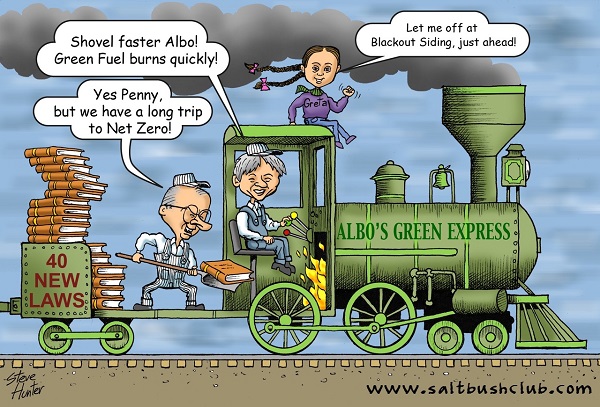 Not only is it imperative to start the domestic repeal movement, but Australia also needs to back out of the international agreements swamp.  Top priority here is to withdraw from the Paris Climate Agreement.

Probably the worst bill in Green-Albo’s legislative avalanche is “The Climate Change Bill.”  This dreadful piece of legislation gives the government the ability to “ratchet up” green targets without new parliamentary approval but makes it difficult for future governments to ratchet back these targets.  This will clutter rural Australia with imported solar panels and windmills and destroy forests and grasslands with spider-webs of roads and transmission lines.  It will make blackouts more likely and destroy any heavy industry we have left.  Filling our cities with electric cars will stress the electricity grid and add greatly to urban fire risks.  And in 15 years (or after every cyclone), we will have an enormous problem trying to dispose of the worn out, non-degradable wind and solar generator debris.

Wind and solar are almost useless without big battery storage.  But Turnbull’s Green Elephant, the Snowy 2 pumped hydro, is way behind in time and way ahead in costs.