Reports are coming in that many military personnel have not received their absentee ballots in time for their votes to be counted this election.

With over 1 million men and women deployed overseas, this is a national disgrace. 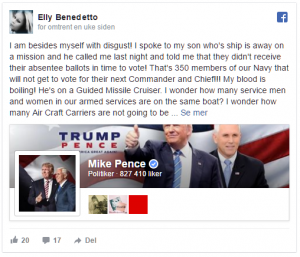 This is nothing new. Obama was widely accused of suppressing the military vote back in 2012.

When Americans vote for president in November, many of the 1.4 million active-duty U.S. military personnel stationed or deployed overseas will not know whether their absentee ballots have reached their home states to be counted. And the federal Election Assistance Commission, charged with monitoring their votes, may not know either.