2016 will go down in history as the year when the world finally saw sense. Nowhere will this be more apparent than in America’s bold and brilliant decision to elect Donald Trump who, in my view, is set fair to be one of the truly great U.S. presidents.

I realise that this isn’t obvious to some people—even those who claim to be on the conservative side of the political argument. But after a recent trip to D.C. for some private briefings, both with his transition teams and with key members of the Vast Right-Wing Conspiracy, I came away more confident than ever that Trump has what it takes—especially when it comes to dealing with arguably the most dangerous menace of our time: the massively corrupt, overblown, expensive, misanthropic, bullying, insidious, ugly, mendacious and hideously destructive environmental industry—aka The Green Blob.

Sure there are other geopolitical threats out there—from ISIS, Iran and the crumbling EU to a muscle-flexing Russia and an increasingly arrogant China—but there’s probably none which has quite so big an impact on ordinary peoples’ daily lives, on their economic and social wellbeing, and on their children’s future as the Green Blob.

The Green Blob’s tentacles extend everywhere: into our kids’ classrooms (where they are brainwashed with environmental propaganda); into our universities (where whole departments have now been hijacked by green junk science—because hey, that’s where the money is); into the mainstream media (most of which repeats, unquestioningly, the spurious claims of impending eco-disaster put out by environmental activists and publicity-hungry university departments); into business, which now wastes billions on environmental compliance and billions more on energy costs artificially inflated by the almost entirely unnecessary government-mandated drive for renewables); into government (where few politicians, even now, have the nous to appreciate that they have been sold a pup and who still continue to inflict more “sustainable” initiatives on their hapless electorates); into the economy, where jobs have been killed and growth blighted by measures designed by eco-fascists on a self-admitted mission to destroy Western industrial civilisation; into the environment, which has been ravaged by the very things we’re told are supposed to help save it—from bat-chomping, bird-slicing eco crucifixes to those forests in the US which have been chopped down to create wood-chip biofuels to be burned at Britain’s Drax power station to the rare-earth minerals mined in appalling conditions in China to make wind turbines; into the cost of living (inflated by green taxes, regulations and tariffs), where in some cases people have been driven into fuel poverty and an early death because governments like Obama’s have caused electricity prices “necessarily” to “skyrocket” by mandating renewables over cheaper, more reliable fossil fuel.

This insanity has been allowed to prevail, largely unchecked, for over four decades. While enriching a corrupt few, it has caused misery to billions. It costs the global economy at least $1.5 trillion every year in “decarbonisation” expenditure which serves no purpose other than to give virtue-signallers a warm glow of self-righteous satisfaction.

And no major politician, anywhere in the world, has had either the courage or the conviction to deal with it.

The Donald Trump presidency is a game changer. It’s the black swan event the world so sorely needed to avert what was threatening to become an out-of-control disaster.

Had Hillary won the Green Blob would have become so entrenched and powerful as to become almost indestructible.

Had any other GOP candidate but Trump won, very little would have changed—because the GOP establishment (notably the Bushes) has been almost as useless at facing off the green menace as the Democrats.

In a brief series of Trump Vs The Green Blob articles, I’m going to be telling you what I learned on my fact-finding mission to DC, explaining why this battle is so important, and giving you both the good news (Trump’s picks are, for the most part, looking promising) and the bad (some of his picks are less than ideal—starting with Rex Tillerson…)

A common refrain among the conservatives I met in D.C. (most of them, like me, of the red-meat variety) was this:

“This is our chance. We never expected it to come our way. Now it’s here we’ve got to make damn sure we don’t blow it!”

I agree. Which is why here at Breitbart we’re going to start looking at environmental issues more closely than ever. We’re going to hold President Trump to account and help him do the right thing when—you can be sure of this—there will so many vested interests doing their darnedest to try and make him do the wrong thing…. 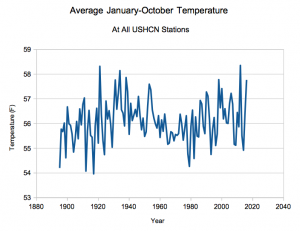 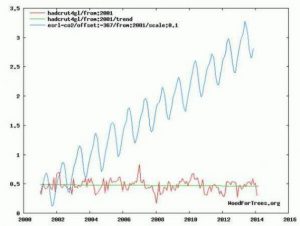 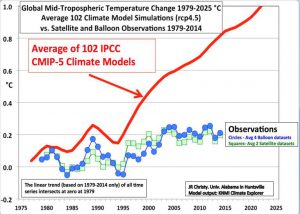 .. and because temperature isn’t rising, adjustments has to be done. 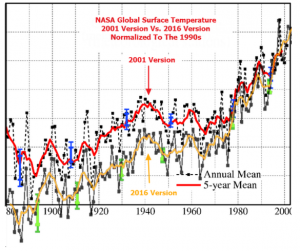 A close-up view, see the difference between 1-class data by satellites and the fake 3. grade desk-top adjusted NASA swindle. 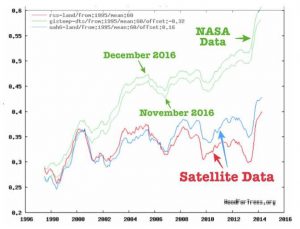 Somebody needs to go to prison!