The suspect in the vehicular attack that killed 9 people, injured 16 has been identified as Alek Minassian…

U.S. law enforcement sources told CBS News that the incident appears to be a deliberate act…..Minister of Public Safety Ralph Goodale said that it was too soon to say whether the crash was a case of international terrorism and that the government had not raised its terrorism alert.

As reported by Jihad Watch earlier, it is too early to establish motive. At this stage, there is no confirmation that the attack was a jihad attack, however, it is to be noted that global jihadists employ this method of operation which has been called for by the Islamic State and al Qaeda.  Updates will continue.

his sources in Canada said the van driver was known to police and consider the incident a terrorist attack.

TORONTO — A van struck and killed nine pedestrians Monday afternoon in north Toronto and fled the scene, Canadian police said. Sixteen others were injured in the incident. Authorities said the van has been found and the driver was in custody. Police said they did not yet know the cause or any possible motive.

U.S. law enforcement sources told CBS News that the incident appears to be a deliberate act. Witnesses said the driver was moving fast and appeared to be acting deliberately.

Minister of Public Safety Ralph Goodale said that it was too soon to say whether the crash was a case of international terrorism and that the government had not raised its terrorism alert.

Toronto Police Services Deputy Chief Peter Yuen released no details about the investigation as he announced the casualties.

Yuen said police were still interviewing witnesses and examining surveillance video of the incident as part of what he called a “complex” investigation.

“I can assure the public all our available resources have been brought in to investigate this tragic situation,” he said.

The incident occurred as Cabinet ministers from the major industrial countries were gathered in Canada to discuss a range of international issues in the run-up to the G7 meeting near Quebec City in June.

The driver was heading south on busy Yonge Street around 1:30 p.m. and the streets were crowded with people enjoying an unseasonably warm day when the van jumped onto the sidewalk.

Ali Shaker, who was driving near the van at the time, told Canadian broadcast outlet CP24 that the driver appeared to be moving deliberately through the crowd at more than 30 mph.

“He just went on the sidewalk,” a distraught Shaker said. “He just started hitting everybody, man. He hit every single person on the sidewalk. Anybody in his way he would hit.”…

This is odd. Canadian authorities are saying that the attack was a manifestation of mental illness, not terrorism. Of course, we have seen many attacks that are obviously jihad ascribed to mental illness, so that must be taken into consideration, but the mayor’s words are odd in any case. Toronto has always been “inclusive” of the mentally ill? Of those who drive trucks into pedestrians? Or is there a community that John Tory is anxious to assure the world that Toronto is “inclusive” of, that has some connection to this attack?

Toronto Mayor @JohnTory: “This is a time when this community should come together…I hope that we will, as a city, remind ourselves of the fact that we are admired around the world for being inclusive and for being accepting and understanding and considerate.” pic.twitter.com/prHLH4n6HR

Toronto Mayor John Tory encouraged residents to remember their city’s worldwide reputation for tolerance and inclusiveness — hours after a man mowed down pedestrians with a rental van, killing at least nine people and injuring several more.

“This is a time when this community should come together … I hope that we will, as a city, remind ourselves of the fact that we are admired around the world for being inclusive and for being accepting and understanding and considerate,” Tory said at a news conference on Monday’s attack.

The suspect, who has not been publicly identified, drove a white Ryder van onto a sidewalk north of downtown Toronto, police said. After smashing into several pedestrians and coming to a stop, the man exited the van and waved a dark object at responding police officers. A brief standoff ensued, but officers were able to detain the suspect without firing any shots.

One suspect is in custody following the incident, which is being treated at a deliberate attack, acting Toronto Police Chief Peter Yuen confirmed. Witnesses described the suspect as being “Middle Eastern” in appearance, but authorities have not said if the attack is tied to Islamic terrorism….

Canada: Muslim stabs ex-girlfriend 40 times, slits her throat, shoots her for “taking ownership of her life” 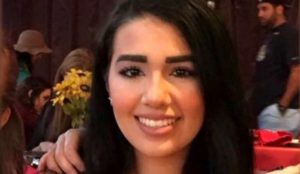 Abderrahmane Bettahar was raised in a culture of violence that calls for the beating of disobedient women. The Qur’an says: “Men have authority over women because Allah has made the one superior to the other, and because they spend their wealth to maintain them. Good women are obedient. They guard their unseen parts because Allah has guarded them. As for those from whom you fear disobedience, admonish them and send them to beds apart and beat them.” (Qur’an 4:34)

And in a hadith, Aisha, Muhammad’s child bride, says that Muhammad “struck me on the chest which caused me pain, and then said: Did you think that Allah and His Apostle would deal unjustly with you?” (Sahih Muslim 2127)

A 22-year-old woman who died last month at the hands of her ex-boyfriend was stabbed 40 times and had her throat slit before being shot twice as she tried to escape her attacker, police say.

Nadia El-Dib’s body was found behind a home in northeast Calgary on March 25. Her killer, Abderrahmane Bettahar, 21, died four days later in a shootout with RCMP officers near Edmonton.

Because there will be no trial and the case is considered closed, Calgary police released details of El-Dib’s last moments Wednesday at the request of her family.

Police say they believe Bettahar and El-Dib left a downtown shisha bar together at around 3 a.m. on March 25. Despite having dated in late 2017, the two weren’t in a relationship at the time, police say.

Around 4 a.m., El-Dib contacted a friend to tell them Bettahar was refusing to take her back to her car.

Police say that fifteen minutes later, he parked behind a house in the 1000 block of Maitland Drive N.E., where Bettahar repeatedly stabbed El-Dib.

El-Dib managed to escape the vehicle, despite her injuries.

Bettahar followed and shot her twice with a semi-automatic rifle that police say he purchased legally two weeks before the attack.

Evidence showed El-Dib was on the ground when Bettahar fired the second shot.

Her sister, Racha El-Dib, called Bettahar “a disturbed young man, who believed he had the right to murder her because she exercised her right of taking ownership of her life, body and soul, by saying no to a man who was persistent on being with her.”… 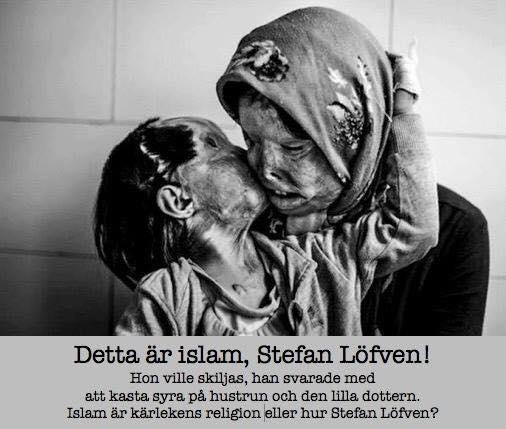 Sweden: “This is islam, Stefan Löfven!

She wanted a divorce, he answered by throwing acid at his wife and his little daughter.
Islam is the religion of love, isn’t it Stefan Löfven?