“In typical Washington Post fashion, they’ve gotten their facts wrong,” Jason Miller, Senior Communications Advisor for Trump, said in a statement released Tuesday. The statement was in response to the latest story by the Post’s  David Fahrenthold claiming Trump used $258,000 from his charity to settle four legal disputes. 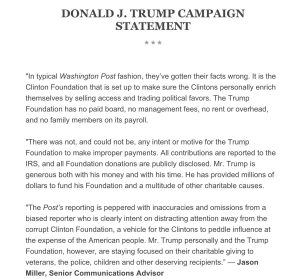 According to Fahrenthold, who has been digging into Trump’s charity donations for a while:

Donald Trump spent more than a quarter-million dollars from his charitable foundation to settle lawsuits that involved the billionaire’s for-profit businesses, according to interviews and a review of legal documents.

Those cases, which together used $258,000 from Trump’s charity, were among four newly documented expenditures in which Trump may have violated laws against “self-dealing” — which prohibit nonprofit leaders from using charity money to benefit themselves or their businesses.

In one case, from 2007, Trump’s Mar-a-Lago Club faced $120,000 in unpaid fines from the town of Palm Beach, Fla., resulting from a dispute over the height of a flagpole.

In a settlement, Palm Beach agreed to waive those fines — if Trump’s club made a $100,000 donation to a specific charity for veterans. Instead, Trump sent a check from the Donald J. Trump Foundation, a charity funded almost entirely by other people’s money, according to tax records.

The Trump campaign’s response stated that there was not “any intent or motive for the Trump Foundation to make improper payments. All contributions are reported to the IRS, and all Foundation donations are publicly disclosed.”

It further pointed to the Post story as “peppered with inaccuracies and omissions from a biased reporter who is clearly intent on distracting attention away from the corrupt Clinton Foundation.”

The statement, along with an appearance on CNN by Trump’s campaign manager Kellyanne Conway, did not seem to appease reporters.