Hillary Clinton is living a self-inflicted email nightmare, and according to a video circulating the internet, she knew it was coming.

A Twitter user posted video of Clinton discussing why in the world she would ever use an email account. The clip was purportedly taken from an ABC report from 2000 that shows home video from convicted felon Peter F. Paul.

It appears the report was to prove a connection between Clinton and Paul, a former lawyer who was convicted for conspiracy and drug dealing. He was also convicted for securities fraud in connection with his business dealings with comic-book tycoon Stan Lee, according to Wikipedia.  But it’s what Clinton is overheard saying that is grabbing people’s attention today.

“And my… why would I have ever wanted to do email? Can you imagine?” Hillary is heard telling Paul and Lee. 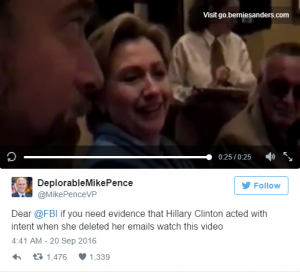 Read more of that story here .. but notice another thing in that picture, the link at the upper right corner. That still works (on the video), Bernie Sander is still collecting money for his 2016 presidential bid .. Isn’t that nice, special and ILLEGAL?

Internal Memo Reveals Capitol Police Were Warned BLM from Baltimore Was Bussing in Rioters Disguised as Trump Supporters on Jan. 6 – Everybody knew Democrats was pretending to be Trump supporters, that was for example the point of not having enough security, inviting people in, shooting unarmed people etc. To get things started, it was all planned. A cover up for the election theft.

Mix poison and coffee, – deadly! Mix poison in tea, also deadly … Put poison in food, probably also deadly, right? It’s the same with socialism, no matter how you mix it, it is deadly!!

When low IQ., criminal Democrats are in charge: Several NYC Election Sites Had ‘No Republican Ballots’ During Last Week’s Primary

100 Year-Old Decorated Veteran Breaks Down Crying: “This Is Not The Country We Fought For”

Historian and Author Douglas MacKinnon: Tyranny in America Worse Today than in 1776

Biden administration confirms goal is ‘liberal world order’ – Or, in plain English: Low IQ., corrupt communist (tyrannical) rule, the kind the people need to shed blood to get rid off. The question is, how bad (as in evil, corrupt AND stupid) does it have to get before the people has had enough!?

The Purpose Of Communist Propaganda

The Creed Of Slaves