It was ice, not global warming, that killed and entombed millions of mammoths and woolly rhinos in Siberia and Alaska.

It was unrelenting cold and then ice, not global warming, that forced the Vikings out of Greenland.

It was bitter winters, not heat waves, that finally defeated the armies of Napoleon and Hitler in Russia.

George Washington’s army also suffered from an unusually bitter winter at Valley Forge in 1778, in the depths of the Little Ice Age.

When the Tambora volcano exploded in 1816 it spewed massive volumes of ash and “greenhouse” gases including carbon dioxide into the atmosphere. There was no global warming from the greenhouse gases, but the heat-blocking ash-filled atmosphere and a quiet sun caused “the year without a summer”. Failed crops and famine stalked Europe, Asia and America.

It is icebergs, not warm oceans, that sink ships like the Titanic, and spreading sea ice trapped “The Ship of Fools” in Antarctica.

Every major geological era has ended with massive volcanism on land and under the seas. Molten lava heats the seas and eruptions on land fill the atmosphere with dust which blocks incoming solar energy. There is rapid evaporation from the warm seas followed by rapid condensation in the cold dark atmosphere. This process dumps massive snowfalls which become ice sheets on land, starting a new ice age and bringing the extinction of many species.

It is lethal global cooling we need to fear, not life-sustaining global warming. 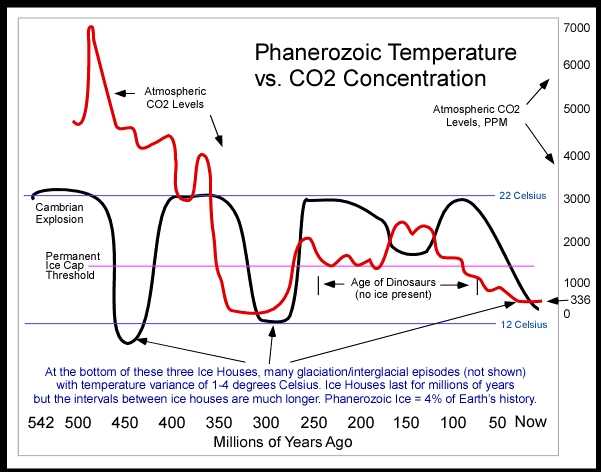 New paper studies Ordovician Ice Age, which occurred when CO2 was 11 times higher than the present

A paper published today in Palaeogeography, Palaeoclimatology, Palaeoecology studies the timing of the onset of the late Ordovician ice age, which occurred when CO2 levels were more than 11 times higher than the present. The late Ordovician ice age occurred around 450 million years ago, when temperatures plunged 10C from “greenhouse conditions” despite CO2 levels of around 4500 ppm in comparison to today’s level of 400 ppm, demonstrating that CO2 is not the “control knob” of climate.

The late Ordovician ice age occurred around 450 million years ago, when temperatures plunged 10C despite CO2 levels remaining over 11 times higher than the present.
In fact, the entire geological record demonstrates a disconnect between temperature and CO2 levels, but excellent agreement with the change in cosmic rays, which is a proxy of solar activity.

The major glaciation at the end of the Ordovician is associated with the 2nd largest mass extinction event of the Phanerozoic. Growth of Late Ordovician ice sheets requires a dramatic cooling from the ‘greenhouse’ conditions that prevailed for most of the Ordovician, but when and how fast this cooling occurred is controversial. The controversy is due in large part to a lack of good geochemical constraints on the temperature history of the Katian (453–445.2 Ma). To address this uncertainty, we measured phosphate δ18O values from 3 conodont species collected from sections in the midcontinent region of the United States that span an ~ 5.7 m.y. long interval covering most of the Katian. Results reveal a statistically significant offset in δ18O values between some taxa and show up to 2‰ differences among samples. However, there are no apparent long-term trends within or between sections; rather, values fluctuate around a δ 18O mean of ~ 19‰ VSMOW. Our study provides the longest, relatively high resolution, species specific conodont record generated for this interval, and we found no evidence supporting progressive cooling during the Katian.