How nice, the electricity they don’t have is the cleanest in Australia. That is like paying minimum wage for jobs that doesn’t exist. Socialist are fucking STUPID!!

The most recent grid collapse in South Australia (one that was not the first and which will, by no means, be the last) has left it the butt of jokes in its neighbouring States (not attempting to run on sunshine and breezes) and around the World.

For a – ‘don’t say we didn’t warn you’ – chuckle, we’ll start the batting with STT Champion, ‘Slim Jim’ Delingpole.

The entire state of South Australia was blacked out by power cuts last night sending 1.67 million householders back to the dark ages. This comes just days after a report called Keeping The Lights On warned that black outs might be a consequence of the state’s radical green energy policies.

Local media has blamed it on “the most extreme weather systems to hit in 50 years.” But a more likely culprit would seem to be the state’s disastrous “clean” energy policy which has driven up electricity prices to insane levels and severely threatened the reliability and stability of the state’s grid.

As we reported at Breitbart earlier this year, South Australia now has the cleanest energy in Australia – 40 per cent of its energy capacity comes from wind – but also by far the most expensive. The wholesale price for electricity in most Australian states is $30/MWh and $32/MWh. Earlier this year, in South Australia it reached an eye-watering $1400/MWh [note to JD, if it was only $1,400! – when wind power output collapses the spot price regularly hits the market price regulated cap of $14,000 per MWh] – wreaking havoc on energy-intensive local industries such as BHP.

A renewable energy lobby group called the Clean Energy Council has been quick to deny hat the massive blackout has anything to do with green energy policy:

“The blackout in South Australia appears to have been caused by extreme winds which have caused damage to large electricity pylons at multiple locations across the state, policy manager Tom Butler said.

“This is not an issue relating to power generation – whether renewable energy, gas or otherwise – and by all accounts there was little that could have been done to prevent it.

Mr Butler said wind power was generating lots of electricity at the time the system went down, with the rest of the state supplied by gas-fired power and the interconnector.

“It is important to remember that this is a once-in-50-year storm, and no power system can fully prepare for the savage winds, lightning and hail that pounded the state today. It is a freak event.”

The idea that a storm – even an alleged once-in-fifty-years storm chucking down hailstones the size of golfballs and comprising over 130,000 lightning strikes – should be capable of immobilising an entire state’s grid network is more a case of culpable incompetence than an Act of God.

This is what a report published earlier this week by Australia’s Grattan Institute warned would happen. And it wasn’t even a particularly anti-renewables report.

It simply pointed out that the drive for renewables in South Australia – led by a character called Tom Koutsantonis, who came to power as South Australia’s Energy Minister with a bold promise to reduce net carbon emissions in his jurisdiction to zero by 2050 – has driven many, traditional brown-coal-fired power stations out of business. This means that there is a dangerous shortage of reliable, baseload power capacity in times of crisis.

South Australia’s experience offers a salutary warning to all those other countries foolish enough to imagine – as the Labour party does in Britain, for example – that renewables represent any kind of workable solution to the world’s energy problems.
Breitbart 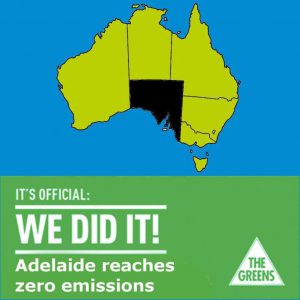 In the next piece of barely disguised schadenfreude, James references none other than STT to help with another power-calamity punchline at South Australian’s expense.

Coming to a Town Near You: The Great Green Energy Disaster
Breitbart
James Delingpole
30 September 2016

Have you ever found yourself stuck in a broken down elevator? I have and it’s absolutely bloody terrifying. The claustrophobia; the rising heat; the shortage of air; the gnawing fear that something even worse might happen – a fire, say – before the rescue services have time to reach you…

Well, in the South Australian blackouts this week a lot of people had exactly this nightmare experience. Others found themselves on trains that suddenly stopped, or stuck on aeroplanes unable to disembark, or gridlocked in traffic, or stuck in their homes without TV or refrigeration or air-conditioning  or hot food or heating or internet or any way of discovering what was happening in the outside world.

In Third World countries and war zones, people get used to this kind of thing. But the idea that such a state of affairs should apply in country like Australia is absurd beyond measure. Not as absurd or outrageous, though, as the disgraceful fact that this was a largely man-made disaster brought about by government green energy policy.

This graph from Stop These Things tells the story better than words can: 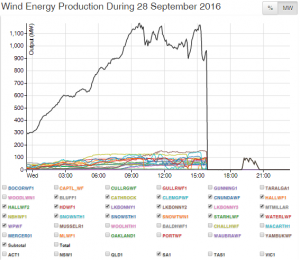 Yep. Jo Nova quite rightly says that we should remain cautious until the full facts emerge. But it does look quite likely that power surges from those wonderful wind turbines championed by green activists and shyster politicians alike from Ontario to the US to Germany to the UK may have crashed the entire grid network of a whole Australian state, populated by 1.7 million people.

As Stop These Things  puts it:

The price of living with ‘PEC’ – ie trying to run on sunshine and breezes – is paid for with wrecked electrical appliances and – when the system shuts down to protect itself from wind power surges and collapses – the failure of whole local systems.

PEC by the way – it stands for Power Electric Converter – is the fancy local euphemism for wind and solar energy.

Clearly, lots of South Australians were very impressed by the sound of it when they voted in their current Labor government, led by one Jay Weatherill and including Energy Minister Tom Koutsantonis who has successfully made their state the most eco-friendly in all Australia. Wind power comprises an astonishing 40 per cent of South Australia’s energy capacity.

Perhaps they’re less impressed now they’ve seen what “clean energy” does. (When it’s not slicing and dicing avian fauna; and blighting the landscape; making people sick with headaches, palpitations, insomnia, heart problems, anxiety attacks, raised cortisol levels; driving up electricity prices to eye-watering levels; and sucking up subsidies for a few lucky landowners and green troughers while everyone else has the extra cost dumped on their electricity bills).

“A number of the state Labor Governments have over the years set priorities and renewable targets that are extremely aggressive, extremely unrealistic, and have paid little or no attention to energy security.”

This would be much more convincing if the Honourable Member for Goldman Sachs wasn’t himself part of the problem. Though Turnbull currently leads Australia’s conservative party – the Liberals – he is the embodiment of the smoothy-chops, Davos-Man, globalist elite which bears much of the responsibility for pushing the green agenda.

Around the world, some politicians are waking up to the fact that global warming is a much, much smaller problem than the expensive, counterproductive measures being taken to deal with it.

“The climate has been changing for four billion years,” said the Republican leader, “but it wasn’t industry that turned the Sahara into a desert.”

as, of course US presidential contender Donald Trump.

But there is currently not a single major economy anywhere in the Western world which doesn’t pay lip service to the supposed renewable energy imperative that has just wreaked such havoc in South Australia.

Something needs to be done about this. The South Australian experience really ought to be a wake-up call to the rest of the world.
Breitbart