Liberals are watching Donald Trump’s every move for wrongdoing in their eyes, and they thought that they found the golden ticket to trash him when he didn’t go to an African-American museum for Martin Luther King Day. Their claws came out, ripping our allegedly racist president-elect to shreds, but they were immediately shut down with the incredible thing he did instead that our first black president never did.

When asked about why he skipped out on stopping by the Smithsonian Museum of African American History and Culture, his staff simply told the press that it was because of scheduling conflicts. This only added more fuel to the leftist fire, since they didn’t buy that he couldn’t make the time and felt validated in their claims that it’s because he hates black people. Amidst arguments that this was a missed “chance for much-needed goodwill after his feud with a civil rights leader,” what Trump did, as other people blasted him, paints a very different picture.

More important than making a token stop at a museum to say he did and appease his detractors, our next president is more about being hands on, trying to actually accomplish what Martin Luther King set out to do. He proved that by meeting with the son of Martin Luther King Jr at Trump Tower yesterday instead. He didn’t even publicize his closed-door meeting as further proof that he cares less about what his detractors say about him and is more concerned with making good on his promise to make America great again, which includes restoring race relations that were destroyed under Barack Obama. 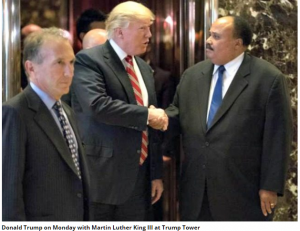 “Martin Luther King III said Monday — the federal holiday honoring his father — said he had a ‘very constructive’ meeting with President-elect Donald Trump at Trump Tower in New York,” The Hill reported. When prodded by the biased media to get a jab in at Trump for his weekend criticism of civil rights icon Rep. John Lewis, King declined and responded with pure class, sticking to the issue.

“The goal is to bring America together and Americans. We are a great nation, but we must become a greater nation. And what my father represented, my mother represented through her life, what I hope that I am trying to do is always bring people together,” he told a reporter, according to American Lookout.

Both Trump and King came together for a closed-door meeting and with common ground between them to truly make America the country that King’s father wanted it to be. They are going to make that happen, despite the liberals and the mainstream media trying their hardest to perpetuate divisiveness.