Reading the news today, it seems that lately the world is becoming increasingly FUBAR thanks to government meddling in the name of climate and environment. Here is a sample of news items just from today:

Puerto Rico’s entire population is still out of power Thursday after a fire at a power plant shut down the island’s grid, and they have the U.S. Environmental Protection Agency (EPA) to thank.

Now, 3.5 million people are out of electricity.

EPA blocked Puerto Rico’s plans to import the liquefied natural gas (LNG) to run the new plant in the name of saving sea turtles. The agency has delayed the LNG terminal for more than two years by forcing design changes to limit its impact on coral reefs. No construction work has begun on the import terminal.

In yet another attack on California businesses, yesterday Governor Jerry Brown signed into law a bill (SB 1383) that requires the state to cut methane emissions from dairy cows and other animals by 40% by 2030.  The bill is yet another massive blow to the agricultural industry in the state of California that has already suffered from the Governor’s passage of a $15 minimum wage and a recent bill that makes California literally the only state in the entire country to provide overtime pay to seasonal agricultural workers after working 40 hours per week or 8 hours per day (see “California Just Passed A $1.7 Billion Tax On The Whole Country That No One Noticed“).

According to a statement from Western United Dairymen CEO, Anja Raudabaugh, California’s Air Resources Board wants to regulate animal methane emissions even though it admits there is no known method for achieving the the type of reduction sought by SB 1383.

“The California Air Resources Board wants to regulate cow emissions, even though its Short-Lived Climate Pollutant(SLCP) reduction strategy acknowledges that there’s no known way to achieve this reduction.“

Among other things, compliance with the bill will likely require California dairies to install “methane digesters” that convert the organic matter in manure into methane that can then be converted to energy for on-farm or off-farm consumption.  The problem, of course, is that methane digesters are expensive and with California producing 20% of the country’s milk we suspect that means that California has just passed another massive “food tax” on the country.

President Obama is asking 20 federal offices to work together on a national security strategy to address climate change.

He charged the group with developing a climate change action plan within 90 days, laying out steps for sharing climate data, research ideas and vulnerability assessments for parts of the United States that are threatened by climate change over the next three decades.

More than 20 world leaders tendered legal documents on Wednesday, formally binding their governments to the Paris climate accord at a General Assembly ceremony here and all but ensuring that the agreement will go into force by the end of the year.

The specifics of each country’s plans, though, are voluntary. There are no sanctions for failing to control pollution or to put economic polices into practice, or for submitting unambitious pledges.

The legally binding portion of the Paris accord does little more than require governments to continue to convene at high-profile global climate summit meetings, make public pledges to tackle global warming at home and submit those plans to be published on a United Nations website. 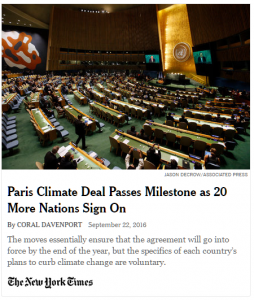 The U.S. Securities and Exchange Commission is investigating how Exxon MobilCorp.values its assets in a world of increasing climate-change regulations, a probe that could have far-reaching consequences for the oil and gas industry.

The SEC sought information and documents in August from Exxon and the company’s auditor, PricewaterhouseCoopers LLP, according to people familiar with the matter. The federal agency has been receiving documents the company submitted as part of a continuing probe into similar issues begun last year by New York Attorney General Eric Schneiderman, the people said.

The SEC’s probe is homing in on how Exxon calculates the impact to its business from the world’s mounting response to climate change, including what figures the company uses to account for the future costs of complying with regulations to curb greenhouse gases as it evaluates the economic viability of its projects.

The madness of crowds seems to apply here.