The story they are reporting is that the Russians has damaging information they might use to pressure Trump after he is sworn into office. There’s no information about the story not being confirmed or substantiated, nor do they mention the information is gathered by political adversaries wishing to undermine Trump as President.

This is the part NRK didn’t include from New York Times article:

“The chiefs of America’s intelligence agencies last week presented President Obama and President-elect Donald J. Trump with a summary of unsubstantiated reports that Russia had collected compromising and salacious personal information about Mr. Trump, two officials with knowledge of the briefing said.

The summary is based on memos generated by political operatives seeking to derail Mr. Trump’s candidacy. Details of the reports began circulating in the fall and were widely known among journalists and politicians in Washington. 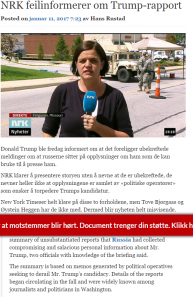 NRK is being funded by a mandatory fee, or license, everyone with a TV-set in Norway has to pay. Annually it’s NOK. 2.867,70

We just love communism – NOT!!